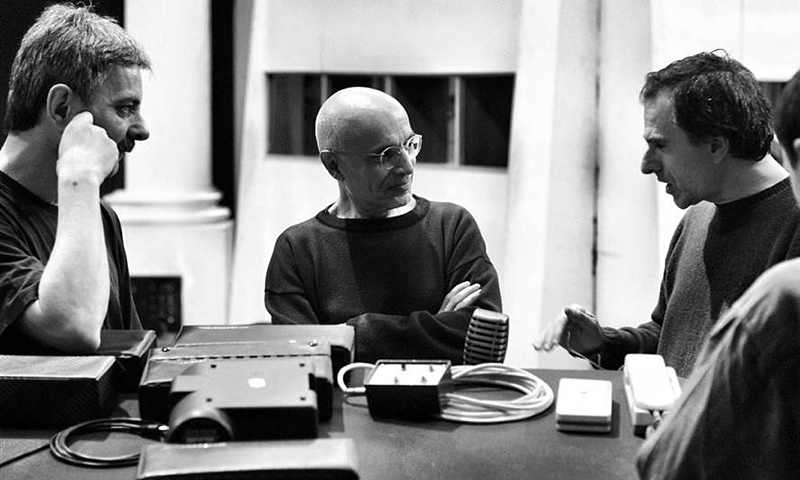 We have lost one of the greatest musicians on the planet, one who discovered the secret of playing 'simply' pure music.

Soon after hearing about Paul Motian's passing (November 22, 2011) I felt the urge to delve (again) into his music.

Later on, inspired by a moving writing by Ellery Eskelin (published on his website and reproduced below, by his kind permission), I thought it would have been interesting to collect brief memories from musicians which worked with him during his long career, as well as from those who were deeply influenced by him.

So I started my research, contacting as many musicians as possible: many replied with enthusiasm, you will read their recollections here. Others declined due to lack of time, others, unfortunately, never replied.

The idea which guided the project was very simple: I asked each musician to choose a tune from Motian's discography and write a few lines about him or his music. The first request aims to sketch a sort of in absentia compilation, which could work as a guide to listening for the curious reader; the second tries to shape a multifaceted vision of the artist using the musicians' words.

In other words, All About Paul.

What is clearly coming to light from these writings is the relevance of Motian's music in the creative path of more than a generation of musicians: a sort of underground river that contributed to trace new directions in the history of contemporary jazz.

I heard Paul Motian playing live for the first time 23 years ago. In the summer of 1990, after my high school final exam, I took off for Orbetello, a beautiful town in Tuscany, with a friend of mine for my first (and last) camping holiday.

After coming and setting our tent up we went to town for a walk, to find out what was on that evening. Soon after we met some local friends, which told us about a jazz concert in the park. My friend was reluctant, so I decided to go alone, and, sure to stumble upon a band of local musicians, I was amazed to find out that I was going to listen to Geri Allen's trio with Charlie Haden and Paul Motian. I still remember the magic of that music, and the darkness which was surrounding the stage, to prevent the insects from swarming on the musicians.

That same year I listened to Paul Motian Trio, with Bill Frisell and Joe Lovano, for the first time. It was an unforgettable night in an unforgettable club in Verona, "Il Posto." I remember the musicians coming breathless on stage, severely delayed; the house was already full and eager to listen. They were just able to set up their instruments and do a quick line-check before starting one of those concerts that changed my life forever.

I was lucky enough to listen to Motian many other times, and in various contexts. Each time I was struck by his ability of keeping the music in a perfect balance with a few fundamental gestures. His way of playing was unique, deeply rooted in the tradition, but totally modern and personal; his compositions simple, but profound. He has been a guiding light which led me into fabulous, beautiful places.

Regarding his art, there is nothing I can add to what is stated by the memories you will read. It is clear to me that we have lost one of the greatest musicians on the planet, one who discovered the secret of playing simply Pure Music.

I would like to thank Francesco Bigoni for the precious translations, my wife Nicoletta for the constant editing and, most of all, the great musicians which replied and made this project happen with their touching and invaluable contributions.

Ellery Eskelin—Paul Motian passed away this morning. One of the great drummers in jazz, he was to me one of the world's deepest improvisors and one of the most individual musicians I have ever heard on any instrument. I think back to an evening in the mid 80's when I had the good fortune to play a bit with him. I had just come from an afternoon jam session with some friends. We were playing standards. And it was feeling a bit routine. At a certain point during the session I felt the need to break out of the musical web we were spinning and, almost as a joke, I decided to take an entire solo that was completely free rhythmically, while still making the changes in time. As it happened, my little joke actually seemed to invigorate the music. I might have simply treated the experience as a curiosity, had I not decided to head over to the 55 Bar on Christopher Street in the Village. Guitarist Leni Stern was playing her regular Sunday gig and she would always let me sit in. That evening she had hired Paul Motian to play drums with her. I was surprised and excited at the prospect of playing with him for the first time. With the effect of the afternoon session fresh in my mind, I approached the music in just the same way. The effect of this looser playing had been interesting and unexpected during the afternoon session, but now, with Paul, it was much deeper and richer. When I think back on it over the years, I realize that at that moment in time Paul was probably the most perfect musician on the planet that I could have played with to validate and solidify this approach. His phrasing was so fluid, and yet his internal pulse and feel so strong that I was able to play anything I heard and have it fit the music just the way I wanted it to. I can say with no exaggeration that this was a true musical epiphany. It was as if a door had opened. I walked through and never looked back. Everything I've done since then has come out of that one seemingly casual but quite intense (and amazingly fortuitous) experience.
Paul and I spoke about playing again, but that never quite came about. I would go to hear him play and come away completely inspired each time. Some of the early music I wrote for my band came directly after hearing a set he did at the Village Vanguard in the mid 90's. We would cross paths on the road from time to time. In more recent years I began writing him letters, sending him music. Last time I saw him was at the Vanguard almost a year ago. He sounded amazing as usual. And he looked as if he had another twenty or thirty years in him. During the break I had a few moments to speak with him privately and I reminded him of that night, some twenty odd years ago, and told him how much he and his music meant to me. I'm so glad I had the chance to do that in person. The world feels different without Paul Motian in it... [This contribution was originally published on Ellery Eskelin's website on 22 November 2011—It is reproduced by kind permission of Ellery Eskelin]

Bill Frisell—Thinking about Paul Motian, it is very difficult (impossible) for me to name just one song, one album, one moment that stands out. I'm so lucky (blessed) to have spent so much time with him. His impact on me was (is) huge. Extraordinary. Gigantic. So many memories. Kaleidoscopic. We played together for 30 years. Traveled all over the world. Three decades! But ... I was listening to him long before that. One of the first concerts I went to hear in high school was the Charles Lloyd Quartet. 1968. Paul was in that band. A new world opened up. I never dreamed that a few years later I'd be playing with him. Wow. A lifetime of inspiration. I think about him every day and continue to learn from him. He set the standard. Showed me the possibilities. Still does.

Ben Perowsky—The first time I got to hear and see Paul Motian play was at Saalfelden Jazz Festival in 1985 when I was 19 years old. He was playing with Paul Bley, Bill Frisell and John Surman. The setting alone was mind blowing for me as I hadn't experienced live jazz outside of the NYC or Boston audience. This was like being at a huge rock concert except that the audience full of young people who were camping in the field outside the big tent was extremely quiet during the music, then screaming and cheering afterwards.

For a young drummer who had been exposed to a lot of music and drummers growing up in NYC, Paul still completely turned my head around when I saw and heard him play that night and every time I saw him afterwards for the following 25 years. I don't like to use the word magic but Paul had this inexplicable way of playing the drums with the knowledge and attitude of a most well seasoned master, simultaneously with that of an infant experiencing the nuances of life for the first time. Musical clichés are not an option. Time, meter, form are so internalized that they are implied with subtle suggestion or punctuation. The way a surrealist painter can imply structure or anatomy without stating it is how I try to understand what Paul does behind the drums. And it is in fact magical. His impact on music will be resonating for decades.

Michael Sarin—Great performers and creative expressers—musicians, painters, writers, actors, dancers—the masters, convey to their audience the depth of their experience with an intent distilled by simple and clear gestures. This became clear to me during the mid-1980's via the drumming of Paul Motian while listening to recordings of Paul Bley's Fragments, Keith Jarrett's Shades of Jazz, Bill Frisell's Rambler, and Charlie Haden's Liberation Music Orchestra. Upon moving to New York in 1989, one of the first concert experiences I had was listening to the Paul Motian Trio with Joe Lovano and Bill Frisell at the old Knitting Factory. Although certainly not the first such line-up in jazz, this combination of unique voices greatly helped to validate and legitimize for us young players the idea of a band playing traditional (and original) repertoire without the bass—and by extension, helping to proliferate a host of groups comprised of "non-traditional" instrumentations.
I always felt as if I was hearing paintings while listening to Motian: refined eastern calligraphy; Abstract Expressionism of de Kooning, Pollock, Rothko and Rauschenberg; Man Ray ready-mades and Duchamp, droll and provocative. He showed me how a drummer can move the music forward with silence; and when notes are played, they're with commitment and intention. And with Paul, always spontaneous and in the moment—a true improvisor.

Influential to me was Motian's creations of rhythmic collages during group improvisations—rhythms and beats of different shapes, tempos and timbres played for varying lengths of time. This evoked for me a kaleidoscope effect, spurring reaction—oppositional or parallel—from the other players. Also, his use of brushes as agents of color, not just as quiet time keepers reinforced my own natural inclination toward texture from the drum set.