By DEREK TAYLOR
August 1, 2000
Sign in to view read count 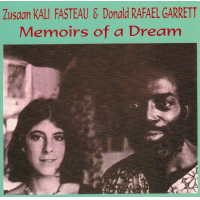 Zusaan Kali Fasteau and Donald Rafael Garrett lived a life together that most couples only dream about. Sharing the vagabond existence of itinerant musicians for the better part of fourteen years they traversed the globe touching down in locales as varied as Senegal, Congo, Morocco, Haiti, France, Holland, Turkey, Italy, Greece, Switzerland, Germany, Belgium and Yugoslavia. Along the way they communicated a highly personal style of creative improvised music to countless sets of open ears. This welcome release unearths two recordings waxed during their travels and stands alongside the now deleted Sea Ensemble (ESP) as the only commercially available documents of their fruitful collaborations.

Garrett, who passed away in 1989, was widely regarded as a master instrumentalist and instrument craftsman. Best known in jazz circles for his formidable prowess on double bass and clarinet he served as an integral component of several of John Coltrane’s most exploratory albums ( Kulu Se Mama, Selflessness and Live In Seattle, all on Impulse) and in the context of the Sea Ensemble with Fasteau his musical parameters opened up to include a multitude of pan-ethnic instruments. Fasteau was similarly versed and as in these recordings their intense and their abiding love for one another comes through abundantly in these recordings.

The vintage of the tapes is somewhat problematic to the sound quality of the performances, particularly on the second disc, but the blemishes pale in importance to the beautiful sounds that are unveiled. The first disc presents two studio pieces, both of which make use of overdubbing to allow Fasteau and Garrett to add a second layer of instruments. Garrett’s bass and balafon merge with Fasteau’s harp and piano on “Zenith” in an oscillating dance of binary rhythms. Soon the former’s corpulent strings stretch across a spiraling progression radiated from Fasteau’s ivories. Further along in the temporal continuum Fasteau’s piquant cello streaks playful brush strokes against a clattering, vaguely metallic percussive canvas. “Bamboo Groove” is more grounded than it’s companion. Rooted firmly with Garrett’s rich bass anchor Fasteau’s ghostly shakuhachi sails emotively above before joining with clarinet, and later voices, to create a fathomless aquatic landscape of brightly plumed harmonic cilia.

Disc two gathers performances from a public concert the pair gave in Turkey opening with the greeting that could fit well as the overarching mantra for this entire set, “welcome to a feast of sound and movement...one sound and one movement...eat heartily and chew your food.” Audiophile listeners with a low tolerance for surface noise and static may be turned off by the offerings collected here, but those willing to sift through the thin veil of static will find aural treasures beneath. Broken into eleven interlocking fragments the performance covers a wide range of emotions and sonorities. Passages blend from one to the next and several of the pieces seem devoid of an appreciable beginning or end, but this kind of cyclical framework appears integral to the Sea Ensemble’s sound and esthetic. Garrett and Fasteau even touch on the cosmic influence of Sun Ra turning in an ethereal rendition of his “Calling Planet Earth” to the tune of osculating shakuhachis. Compared to the studio offerings on the first disc these in-the-moment creations sound far less rehearsed and there is a visceral facet to their execution that is easily intoxicating.

With Garrett’s passing the Sea Ensemble necessarily disolved, but Fasteau has continued her investigations into improvised music releasing a half dozen or so recordings in the last few years (predominantly on Flying Note). This worthwhile set works as a beautiful point of ingress into her earlier work Garrett as well as a stirring testament to the time they shared to together and will hopefully garner a wide audience.