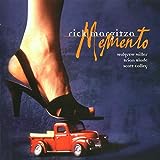 If consistency is a virtue, then Rick Margitza’s second album for the Palmetto label is a truly righteous affair. Memento follows the footsteps of the tenor saxophonist’s seven previous albums offering a melodic program firm on composition and rhythm.

Margitza’s operated in a variety of settings since the late-‘80s when critics heralded him as one of the “young lions”. He started his career as a sideman for Miles Davis; has utilized various ensemble formats on his previous albums; and here on Memento fronts a dynamite quartet.

Memento ’s strong suit mirrors that of the leader’s earlier endeavors: original composition and crack supporting rhythm. The songs on the disc—all Margitza originals—feature engaging melodic development. Tunes like “Touch”, “Spin”, and “Points to Ponder” exhibit formulated, upbeat themes. The curiously titled “Witches” segues from a vacation-evoking groove to reduced tempo moodiness. Requisite ballads and bluesy numbers make an appearance also. The rhythm section smokes—so much so that pianist Mulgrew Miller threatens to steal the show. His relaxed, easy solo on the opening number recalls Wynton Kelly. On “Witches” and “My Truck Broke” he really swings.

Paralleling its positive aspects, the same criticism that has dogged Margitza throughout his career plagues Memento : absence of original improvisation. While less pronounced than on his first albums, Margitza’s extemporization still betrays the influence of Wayne Shorter and John Coltrane. Around his solos on “Touch” and “Blue for Lou” hovers the ghost of Trane. Nothing conceptually divergent occurs on this album from Margitza’s prior oeuvre or the hard bop / post bop genre. Nevertheless, some listeners will find the constancy of Memento reassuring.