By GREG SIMMONS
September 10, 2011
Sign in to view read count 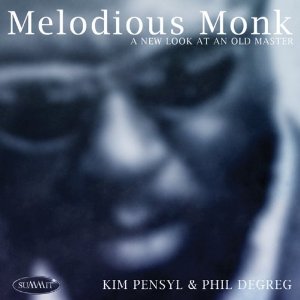 At some point or another, it seems, every jazz musician takes up the challenge of interpreting Thelonious Monk. It must be an unbearable temptation to try to bring some perceived new angle to such a distinct set of compositions, especially when those compositions are so inextricably intertwined with Monk's odd playing style. As if responding to that ancient query about why someone would climb Mount Everest, with the inevitable "because it's there," trumpeter Kim Pensyl and his partner, pianist Phil DeGreg take their turn at climbing the mountain on Melodious Monk.

The core of Melodious Monk is Pensyl and DeGreg's trumpet/piano duo, although there are additional instruments added throughout the record. There are no drums anywhere, and DeGreg's weighty left hand stands in for the rhythm section. The pianist wisely refrains from trying to ape any of Monk's more infamous pianistic eccentricities, although he exhibits an excellent understanding of the complex compositions, and the stride tradition from which Monk sprang. Pensyl has a warm, bronzed tone on trumpet, and stays away from piercing, acrobatic highs in favor of a mellifluous middle ground—more Miles Davis than Dizzy Gillespie.

The fewer instruments in an arrangement, the fewer opportunities there are for musicians to hide. On Melodious Monk, the straight trumpet/piano duets are the riskiest performances, simply because any flaws would be glaring. Pensyl and DeGreg prove themselves up to the task with unimpeachable deliveries. "Reflections" captures blue optimism with a heartfelt, straight-ahead reading, while "Blue Monk" conjures a bit of Crescent City strut that might have been at home on Allen Toussaint's Bright Mississippi (Nonesuch, 2009). Variously adding vibes, bass, and tenor builds diversity within the arrangements ensuring continued interest.

Another highlight is saxophonist Rick VanMatre; while yet to record as a leader, his full tone and exceptional improvisational skills here would make that well worth seeking out. Special mention should also be given to the production. The piano weight and scale of the instruments—especially the bass notes of the piano on "Misterioso"—has been captured brilliantly.

As always, the ultimate danger of making an entire album of Monk's material lies in not adding anything new and worthwhile to these masterpieces. Melodious Monk avoids that trap with simple confidence, earnest performances, and a deep understanding of Monk's unique compositions. It doesn't necessarily break any bold new ground, but Pensyl and DeGreg aren't trying to completely reinvent the wheel here. They succeed because they have an undeniable affection for Monk, and their performance is top-notch.