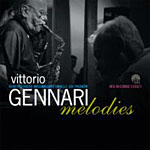 Altoist Vittorio Gennari is scarcely a household word among jazz fans in his native Italy, let alone the wider world. Arriving on the scene late in life, after a long career playing in dance bands, Gennari was in his seventies when he cut his first record as a leader, The Sound (Red, 2006). Now, aged 76, he's followed it up with Melodies; a small gem of an album and the distillation of a lifetime's adoration of jazz that began when he heard the music on the radio as a teenager, after World War II in the Adriatic resort of Pesaro, birthplace of himself and another master of melody, Gioacchino Rossini.

Now that he's finally broken free from strict tempo to play the music he really fell in love with all those years ago, the result is a revelation. Gennari tips his hat to a wide variety of jazz influences, his playing highly inventive and very personal, belying his years.

The disk opens with a gentle, respectful reworking of the old Mexican love song "Besame Mucho," done to death by the world and its wife (including The Beatles, Elvis Presley and Diana Krall). Gennari, who played the song hundreds of times as a faceless member of dance bands, miraculously manages to transcend its schlocky origins. He follows it with Isham Jones' lyrical 1936 standard, "There is No Greater Love," but just as the mould seems set for the proverbial and predictable trip down memory lane, Gennari breaks things up by inserting Horace Silver's "Lonely Woman."

"On the Sunny Side of the Street," a song indelibly associated with Johnny Hodges, is given a somewhat edgier, less rhapsodic treatment than Rabbit ever chose and is adorned—if that is the right word—with a playful ending. It's followed by an up-tempo version of Cole Porter's "What Is This Thing Called Love?" before a return to Europe for the haunting theme from Marcel Camus' 1959 "new wave" movie, Black Orpheus.

Bobby Timmons' "Moanin'"—the theme stated as genteel call and response between Massimiliano Tonelli's bass and the rest of the quartet—breaks things up again. Gennari then attempts to breathe new life into "Blue Moon," cheekily mixing the melody with that of "Moonglow." His version of "My Favorite Things" owes less to John Coltrane than to Arne Domnérus, of Sweden, where the young man from Pesaro worked for a good many years, playing ballrooms in winter, parks in summer.

The set closes with three originals: the achingly lovely ballad "E La Pioggia Continua A Cadere (And The Rain Continues to Fall)," by bassist Massimiliano Tonelli, Gennari's own "Lorenzo," and "Romolina" by pianist Roberto Bachi.

It took Gennari a long time to bring the music stamped on his imagination, as he stood with his ear pressed up against that family radio in postwar Italy, to fruition. But now—four years from his 80th birthday—he's really hitting his stride.

Besame Mucho; There Is No Greater Love; Lonely Woman; On The Sunny Side Of The Street; What Is This Thing Called Love?; Time After Time; Black Orpheus; Moanin'; Blue Moon; My Favorite Things; E La Pioggia Continua A Cadere; Lorenzo; Romolina.