By JACK HUNTLEY
September 17, 2010
Sign in to view read count 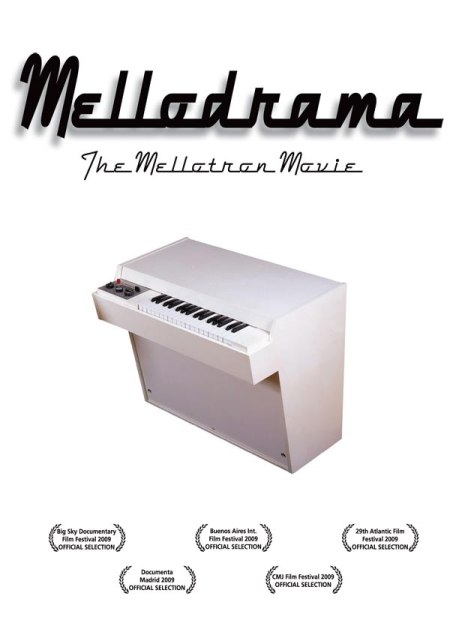 Few instruments in modern music have endured such a tormented life as the Mellotron. In the mid-1960s, the analog, tape-driven keyboard was hailed by rock 'n' roll artists as an expansive musical tool in their arsenal of sound. Especially beloved in progressive rock circles, the Mellotron's rise to fame came rapidly, only to succumb to near irrelevance just as quickly with the shift in taste to punk rock and the rise of the digital synthesizer. All of this plays out in Dianna Dilworth's fascinating and in-depth documentary, Mellodrama: The Mellotron Movie. The film shows how the instrument influenced the course of music and also looks at the cast of characters who shaped its creation and use.

Originally developed in the late 1940s by engineer and organ/keyboard enthusiast Harry Chamberlin, whose vision was to develop a home instrument that played sections of pre-recorded magnetic tape of different instruments, thereby making the music sound like an orchestra. An astute tinkerer, Chamberlin devoted immense time in developing his idea into a useable instrument. He devised an ingenius flexed wire design to tackle a note's tone and attack, for instance, and even created an early looping drum machine to go with some models. Chamberlin also took pains to make sure the sounds he used were recorded with great care. Interestingly given the tunes on which the instrument would later appear, the original tapes were recorded by Chamberlin with members of The Lawrence Welk Orchestra.

The Chamberlin, as it was named, was pitched to instrument retailers across the U.S., and Chamberlin hired salesman Bill Franson to boost sales. The story takes a dubious turn when, unbeknownst to Chamberlin, Franson took two of the instruments to England, removed the identification, and claimed them as his own invention. Answering Franson's ad for manufacturing partnership, Streetly Electronics began development of what would become the Mellotron. After Chamberlin discovered the deceit, a legal arrangement concluded that Chamberlin would sell in the U.S., while Mellotron was limited to England with Chamberlin getting a royalty. As Dilworth's documentary illustrates, devotees still debate the pros and cons of each, but to the listening public, the instrument was referred to as the Mellotron ever after.

One of the factors that makes Dilworth's 80-minute DVD so interesting is the extensive interviews with the musicians who mastered it—there's Mike Pinder of the Moody Blues, Ian McDonald of King Crimson, Patrick Moraz of Yes, and Tony Banks of Gensis, as well as many more. Their insight on how they took what was intended as a parlor instrument and turned it into a "state of the art" progressive rock sound is fascinating. Additionally, much of the charm of this documentary comes from harking back to pre-digital days when production was an analog art form and the pre- internet days when news spread through word-of-mouth. Cheap Trick's Rick Nielsen relates how he got interested and traveled to England to track a Mellotron down, and the Beach Boys' Brian Wilson explains how he used one to accentuate the sounds of real strings.

Entertaining too is the list of songs which incorporate the Chamberlin or Mellotron: "Freebird"—who knew! Much of Dillworth's film is dedicated to the post-decline years, when a small band of enthusiasts kept the instrument from the ash heap. Dilworth takes what could have been a dry, technical subject and creates a fascinating ode to a much maligned instrument, but one which is unknowingly heard daily on MP3 players across the globe. As Brian Wilson says, "The Mellotron stays cool." And Dilworth's engaging film reminds of us why that is true.