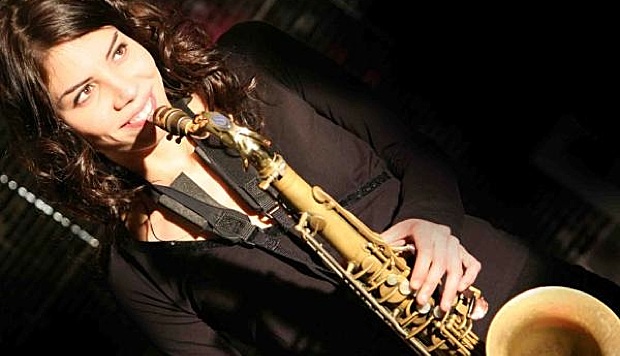 By MARTA RAMON
January 1, 2013
Sign in to view read count
Melissa Aldana may still be in her early twenties, but the tenor saxophonist already knows what it is like to play with big jazz names like saxophonists George Coleman, Benny Golson and George Garzone. In a short time, Aldana has found her own place in the difficult New York jazz scene because she has developed a new voice that has commanded the attention of both the public and her peers.

An obvious talent, one which made Greg Osby stand up and take notice when he first heard her at Boston's Berklee College of Music, combined with a marked perseverance and meticulous study routine is the formula that has brought her to the front line of jazz. She says that Don Byas, Mark Turner, Joe Lovano and Walter Smith III are the four saxophonists who really made her change how she approaches her career, but she continues to keep a close eye on the primary jazz legends.

Aldana recorded her second album, Second Cycle (2012), for Osby's Inner Circle Music imprint (as she did her first), and she travelled to Spain to perform it, along with drummer Francisco Mela and bassist Dee Jay Foster. She started this short tour with the closing concert of Valencia's Jimmy Glass International Jazz Festival, clearly happy return after after two years. And despite being absorbed in the promotion of her new CD, this enterprising saxophonist is also working with a new trio featuring Mela and bassist Pablo Menares. This project will be debuted in January, 2013 at the New York Jazz Gallery.

All About Jazz: You have just released Second Cycle ...

Melissa Aldana: Yes, it is my second CD. I recorded it with my New York Quartet: Ross Pederson on drums, Gordon Au on the trumpet and Joseph Lepore on bass. It is a quartet without [a] harmony [instrument]. This album describes a second cycle, the second stage in my life. Second Cycle talks about my experiences these past two years in New York and all the influences that I have had.

AAJ: Why did you choose this formation without a chordal instrument?

MA: Because it is the way I've been hearing the music lately. I have a lot of influences from some tunes and bands; for example, the Fly trio and a lot of [trumpeter] Tom Harrell's Quartet. I really like compositions without harmony. I think this is the best way to express what I am thinking right now.

AAJ: It is always hard to record an album without a chordal instrument, because some people will feel like they're missing something all the time. Do you think more conservative jazz lovers can still like your new recording?

MA: I think that they are really gonna like it. Even without any harmony in it, the album is a lot of fun to listen to. There is a lot of communication and it is really fresh. I think people are gonna like it; they are really gonna like the new compositions and I think there is a really nice communication between myself and the Au; they will be interested in the tunes as well. This is really how I was feeling, really what came out of my heart. My band, my guys, I love them. I think it is the right thing to do at this moment.

AAJ: Despite there being no chordal instrument, you still establish this wide sound base with that trumpet/tenor dialogue. It looks like there is a lot of understanding between you two.

MA: Yes, I've been playing with this quartet for the past three years. We have travelled a lot together, we have hung out, played a lot of gigs and rehearsals. So it feels really natural; we really got to know each other, really know our playing. And we all trust each other, so I think that really came out on the album. I feel like it is a really organic music.

AAJ: What kind of compositional changes have taken place between Free Fall (Inner Circle Music, 2010), and the new album?

MA: There is no harmony, no piano, so there is a lot more freedom in the form of the tunes, even though we still play in the structure. Different sounds and different textures than on the first album. More freedom and, because of that, more communication on it between everyone.

AAJ: Do you think this represents a new stage of maturity in your music and career, even though you're still relatively young?

MA: Yes, for sure. It was the first step for me to start writing music for this new format, and it is a way to keep growing with my influences and experiences. My writing material has changed quite a lot over the past three years. I always thought that I wanted to record a second album, and I wrote the tunes thinking about the quartet, thinking about the fact that I wanna keep playing with them and seek the chance to blend together and work with them. Then the opportunity to record the album came about.

AAJ: You refer to these experiences of the past three years, so would it be true to say that it is an introspective album?

MA: Yes, it is a perfect reflection of what I have been living and working on. And most of the titles come from experiences, like "First Circle," that connects with the moment when I started thinking about writing new music for this album, or "Meeting Them," which is for Miguel and María Elena, really good friends of mine from New York. Every tune describes different events of the past three years.

AAJ: You have achieved a considerable attention on the international jazz scene, and we can't ignore that that's not usual, being a woman. How many doors were opened and how many were closed because of that?

MA: I think it has sometimes been opening more doors more easily. At the end of the day, I think that the most important thing is to be a strong musician, because that is what really matters, to come up with something unique. But being a woman, even if I don't like to exploit it, I definitely think that it has been a good way to perhaps open some doors and bring people's attention to my work. I think it has been a positive more than a negative.

AAJ: How does it feel to play at New York's the Village Vanguard, being just 22 years old?

MA: It was a really amazing experience, because I knew that it was big deal to play there—anx the fact that I was playing there with [drummer[ Kendrick Scott, Greg Osby and all those important musicians...it meant a lot to me. I learned a lot from being with those wonderful people. More than anything, I feel really blessed to to have lived something so important at such a young age.

AAJ: Greg Osby is one of your mentors.

MA: He was one of my main teachers in Boston. He is one of the people that really taught me how to think, how to make the right decisions. He was a really nice guy from the first time we met. He has been very supportive, he helped me record my first album, and now he helped me record the second. He trusts me, and it has been an amazing experience to know him and to be his friend/

AAJ: And what about George Coleman?

MA: He was like the first person that I met in New York. I used to hang out a lot with a famous instrument repairman—his name is Emilio Lyons—and I knew that they were friends, so before coming to New York I asked Emilio, "Can you ask George if he teaches private lessons?" So Emilio gave him a call and he made me play some solos over the phone. He liked them, so when I arrived to New York I went to his place. So nice, he really liked my playing and believed in me, so he started to give me free lessons. And I started hanging out with him. i also had the huge honor to play with him. I feel really lucky to be able to be close to such a legend, such an important artist. He has definitely been one of my main influences of the past three years.

AAJ: It looks like you are starting to walk on your own with Second Cycle, so will you going next?

MA: I wanna record two albums next year. One would be a record with some older guys in New York, like a jazz standards album, with some arrangements. And then another one, with the same band from my latest record, but with a pianist as well. We'll see what happens. I have many ideas and different projects. I have just started a new trio with Francisco Mela and Pablo Menares, and I think this is gonna be one of my main projects this next year, too. I want to keep my mind busy and keep my motivation strong.