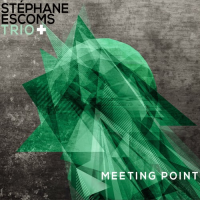 On Meeting Point, French pianist and composer Stéphane Escoms augments his working trio with a dizzying array of musical guests. Ostensibly, the title is a reference to Escoms' flexibility and range as an improvising musician, because each of the collaborations carries with it a distinct ethnic flavor. Fortunately, there's enough space left over for the trio to strut its own unique stuff on five tracks, one of which-"K.M.A."-was written by Escoms' mentor, the brilliant Bulgarian pianist Mario Stantchev. Stantchev's tune mixes an Eddie Harris-like soul strut with the sort of introspection one expects of modern Euro- jazz. Here, Escoms' gospel-steeped solo undeniably conjures the funky, playful sound of Les McCann. Drummer Francesco Rees is featured on "Pick-a-Boo," an engaging slice of modern mainstream jazz that, again, has a 1960s soul shake to it. The surprise here is the rumbustious, go-go-inspired rhythm used to frame Escoms' solo; now storming and dissonant. "Mario," a pretty waltz featuring nimble bassist Jeremy Lirola is less interesting. A tribute to the massive musical legacy of Bill Evans, the trio sounds unnecessarily cautious here, lacking the fire of the other tracks. They rebound on "Market Under The Rain" where Escoms is clearly energized by the surging 6/8 of his rhythm section. There's also a nifty, unexpected turnaround as the piece closes.

On the rest of the album, some of these compositions are revisited using different instrumentations. The duet version of "Mario," with cellist Danny Keane , succeeds by virtue of its sparser instrumentation and subtly different rhythmic feel. The two versions of "Marrakech" also provide the listener with something to think about. On the quartet version, Lirola's agile bass is out front as multi-instrumentalist Anthony Winzerieth picks up the piece's flamenco-inspired Gypsy jazz vibe, adding palmas and wordless vocals before Escoms gets to the melody. His acoustic guitar adds a lot to the piece, and gives Escoms more ideas to work with during his own solo. By contrast, Rees' percussion is more prominent in trio version, and Lirola's solo is extended substantially; both good things. Here, the piece has a soupçon of Chick Corea's piquant compositional sense.

Meeting Point closes out with a curious musical choice: a version of "K.M.A." remixed by François Guilliou. I'm all for musical experimentation, but Guilliou's effects add nothing of interest to perhaps the most complete piece on the album. That said, the added layer of electronic whatever doesn't totally ruin the piece, either, so it's all good, I suppose.