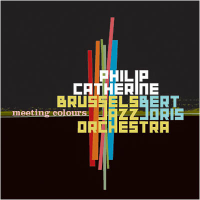 I've sometimes wondered why guitarists don't record more often with big bands. Wes Montgomery and Joe Pass, among others, proved that such a marriage can work quite well, as does Belgian maestro Philip Catherine—who reminds me of Pass—on this impressive new album with the world-class Brussels Jazz Orchestra.

Catherine wrote all but one tune, Ellington's "In a Sentimental Mood, and the marvelous trumpeter Bert Joris arranged everything, sculpting graceful settings for Catherine's mellow guitar that provide ample counterpoint and color but never intrude on his space. Besides soloing, which he does frequently and with panache, Catherine stands in for the piano, and serves unerringly in that role as well. His compositions are bright and tasteful, and Joris carefully remodels them for the big band format. Two of the guitarist's originals, "December 26th and "Dance for Victor, are performed "rubato (think "slower ) and "in-tempo (think "faster ).

The easygoing opener, "On the Ground, establishes an agreeable mood that obtains throughout, with Catherine's spare single-note runs balancing chromatic passages by the orchestra. Joris is given generous solo space too, and he's typically spellbinding and lyrical on "Happy Tears, "Letter from My Mother, the fleet "Piano Groove and "Francis' Delight, "Yellow Landscape, and both versions of "Dance for Victor. Drummer Joost Van Schaik has a brief but persuasive message to impart on "Francis, as does an unnamed tenor, either Kurt Van Herck or Bart Defoort.

Not every "big band with guest blends as seamlessly as this one, whose success can be gauged by the manner in which Catherine, Joris and the BJO work closely together to create a musical experience that is both aesthetically agreeable and vastly rewarding. The framework is sturdy from top to bottom, front to back, and its enhancement is in the very best of hands.