By WAJDI CHERIF
December 21, 2004
Sign in to view read count

Recording an album is capturing a specific creative and inspirational moment and then moving on to something else.

Manuel Rocheman grew up in a rich and stimulating musical environment as both his parents and grandparents were musicians. His father, a guitarist and actor was the founder of the "Hootenanny" in the American centre in Paris, a place where artists come to perform from all around the globe. A major musical events in Rocheman's childhood was receiving Oscar Peterson solo album Tracks as a gift from his brother. That was a trigger for his jazz career, Rocheman recalls.

Rocheman began playing in jam sessions in Paris when he was 12 years old. He developed a strong technique when studying with pianist Alberto Neuman, one of the few disciples of Arturo Michelangeli at the National Conservatory in Paris. In 1980 Rocheman met Tommy Flanagan and Jaki Byard in New York. Both of them encouraged him to pursue a jazz career and he kept in touch with them till their death.

Rocheman won the prestigious Concours International de Piano Jazz Martial Solal in 1989 and imposed himself quickly as a respected pianist. His piano playing and improvisations are very rich harmonically and rhythmically. His technique is amazing. Alone At Last , his first solo piano album released in 2003 features a collection of standards rearranged in a tasty and musical personal manner with a relaxed natural swing feel all through. I asked him if he minded giving an interview for All About Jazz.

All About Jazz: Music is a tradition in your family as your parents, grandmother and one of your aunts were musicians. Did it help that you grew up in such environment?

Manuel Rocheman: Yes of course, I remember all those Sunday afternoons when my parents and relatives got together to play chamber music, Mozart, Schubert, Schumann, etc. Those moments were magical and intense (...) It made me realise that music was a very beautiful thing to share with others and that every one can bring something unique to it.

AAJ: Who are the pianists that influenced you most?

AAJ: There is an evident influence of Bill Evans and Oscar Peterson on your playing in addition to some Latin piano influences.

MR: I love Oscar Peterson and Bill Evans so much. I have naturally mixed their influences and my propensity for Latin music, especially Brazilian music. I'm so fascinated by the rhythms and harmonies of Brazilian music which is very close to jazz harmony. Although it's more binary rhythmically than in jazz, it swings as there is a lot of syncopation.

AAJ: Manuel, do you listen to classical music?

AAJ: What do you keep most out of your stay in New York back in the 80's?

MR: I never really lived in New York, I just used to spend a couple of weeks there from time to time since the 80's. There are many excellent musicians playing there. I was lucky to meet some great musicians there such as Tommy Flanagan and Jaki Byard. I like New York very much. There I often go to jazz clubs where I can meet some friends and jam with other musicians. The ambience is cool and people are very nice and relaxed.

AAJ: You played on your album I'm Old Fashioned released in 2000 with George Mraz and Al Foster. Do you still perform with them?

MR: I enjoyed playing with George Mraz and Al Foster, it was an incredible experience. Al (Foster) who is in my opinion a marvellous drummer, owns a very singular sensitivity and sophistication. He anticipates every event in the music, and his playing is very supple. George (Mraz) is an exceptional bassist too. His bass lines are very rich and stimulating for the other musicians. He has a complete mastery over the sound. I believe that he is part of jazz history. Unfortunately, we don't have concerts scheduled for the trio at present.

AAJ: Does it make a difference for you to play solo piano or in the trio format? Which one do you prefer?

MR: I enjoy both of them. I use more often my left hand when I play solo piano, but in the trio, I can play less and leave space. It is a different kind of control. What's special about the trio is the interaction that can take place between the three musicians, We stimulate each other continuously. We try to lead the music together in a specific direction. When I play solo, I try to find that kind of stimulation within myself by imagining myself the drummer, the bassist and the pianist all at once, like an orchestra conductor, you know. It's more challenging.

AAJ: Do you rehearse often with your trio?

AAJ: Is there any concurrence between your solo piano album Alone At Last and the Oscar Peterson's album your brother offered you when you were 10 years old?

MR: Yes, I guess... I listened to Oscar Peterson's solo recording Tracks when I was only 10 years old. I was very impressed by it and tried to play some passages by ear but I was quickly bored by playing note for note the same lines again and again. Those lines were no more improvised for me. I felt that replaying them that way was like playing a classical musical passage. I recorded Alone At Last in two afternoons. We did not made any editing on takes. I believe that it's not appropriate in jazz to edit a solo or take pieces of it and try to rearrange them in a new way. Improvisation is like telling a story, there is a beginning, a middle and an ending, you can't mix up these elements. 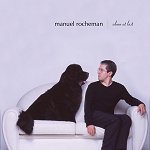 AAJ: How did you choose the repertoire on Alone At Last ?

MR: I played many solo piano concerts during a couple of years before recording Alone at Last , so I got the time to work out things and add the final touches to my solo piano repertoire.

AAJ: Your playing is very rich rhythmically and harmonically. How did you develop these abilities?

AAJ: Do you listen to your work after it's been recorded?

MR: Yes, but only to choose the takes that I like to put on an album. When the recording is released, I stop listening to it. I think it's better to devote my attention to new projects. Recording an album is capturing a creative and inspirational moment and then moving on to something else when it's over.

AAJ: Do you have a specific approach to playing standards?

MR: I try to develop new harmonic progressions while remaining close to the original framework. Sometimes it happens by chance but it's mostly a creative process which involves sitting at the piano until an interesting harmonic progression comes out. The challenge in my opinion is that you have to resist being discouraged on the road. I also try to play standards in all keys, which is very helpful for me and a way to discover and come up with new ideas.

AAJ: How about you quoting one of Monk's tunes in you solo on "Take the A Train"?

MR: Ah, That's Monk "I mean you" which has the same harmonic part on the A section as [Duke] Ellington's "Take The A Train". I did that spontaneously the first time and then it became a habit to mix these two themes when I play.

AAJ: You are going to perform soon a duet with jazz singer Sara Lazarus. Is it the first time you perform together?

MR: No, we actually played together for a long time in the past, I love the way she sings. She is also a very nice person.

AAJ: Do you teach?

MR: I teach at Didier Lockwood's school "CMDL" near Paris. It is very exciting since there is a high musical level. There are many excellent musicians going there to improve.

AAJ: You mentioned the other day in your studio when we met the fact that the musical jazz scene today has become tough for new artists and that the musical technical abilities of musicians got high these recent years.

MR: There are plenty of excellent young musicians now, they all studied in jazz schools and classical conservatories. It is more difficult for them to get noticed because competition is tough. One must own a unique thing that others don't possess in order to get noticed. On the other hand, the work opportunities didn't grow in equality with the growth of the number of jazz musicians.

MR: A solo piano DVD called Live au New Morning was released in mid October this year. Additionally, I would like to record an album with different duets, especially with Olivier Ker Ourio, a wonderful musician who plays harmonica, Sara Lazarus, and others artists.