Maria Muldaur: Meet Me Where They Play The Blues 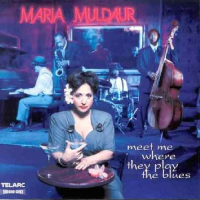 Bob Dole ought to ditch the Viagra and buy Maria Muldaur's latest CD. Muldaur's new one is hotter than Tabasco sauce and a hell of a lot cheaper than those blue pills.

Former pop songstress Muldaur has reconstituted herself as a blues singer while retaining the sexually charged persona that she created with the 1974 hit "Midnight at the Oasis." On Meet Me Where they Play the Blues, Muldaur tackles a subgenre that meshes perfectly with her silky voice and worldly wise style: the jazz-blues hybrid variously known as cool blues or urban blues.

Meet Me was originally intended as a duet album with Charles Brown, the elegant master of the cool blues, but Brown fell ill before the sessions took place. The master bluesman recovered enough to record one track with Muldaur, "Gee Baby Ain't I Good To You," which turned out to be his last recorded work. Sadly Brown passed away of heart failure in January.

Meet Me is a sophisticated blend of Brown's piano-based slow blues, lustful late-night blues, and gospel. The melancholy tunes "All to Myself Alone" and "The Promised Land" most successfully capture Brown's laid-back style, and Muldaur's singing is impeccable on both. On the smoldering tracks "Soothe Me," "I Wanna Be Loved," and "We Can Let It Happen Tonight," Muldaur coos and croons like a bluesy Mae West while a classy combo expertly embellishes her lusty overtures. Credit San Francisco piano-man David Mathews for deftly assuming the instrumental role intended for Brown.

"It Ain't the Meat, it's the Motion" finds Muldaur dabbling in risque swing. This is a song that Muldaur recorded back in the '70s, but it seems a bit out of place on this cool blues collection. More successful is John Hiatt's soulful classic "It Feels Like Rain," which Muldaur transforms into a steamy love paean. "Blue So Bad" is a funky Louisiana swamp rocker. "Misery and the Blues" features a sublime Dixieland horn section, and owes much to one of Muldaur's chief influences, the great Bessie Smith. The gospel cut "He Don't Have the Blues Anymore" is a rather tepid tribute to Brown and New Orleans' Johnny Adams, another cool blues pioneer who passed away last year.

Though it's a bit uneven, Meet Me Where they Play the Blues has enough oomph to put the thrill back into any relationship. Just dim the lights and place it under your beam, baby.