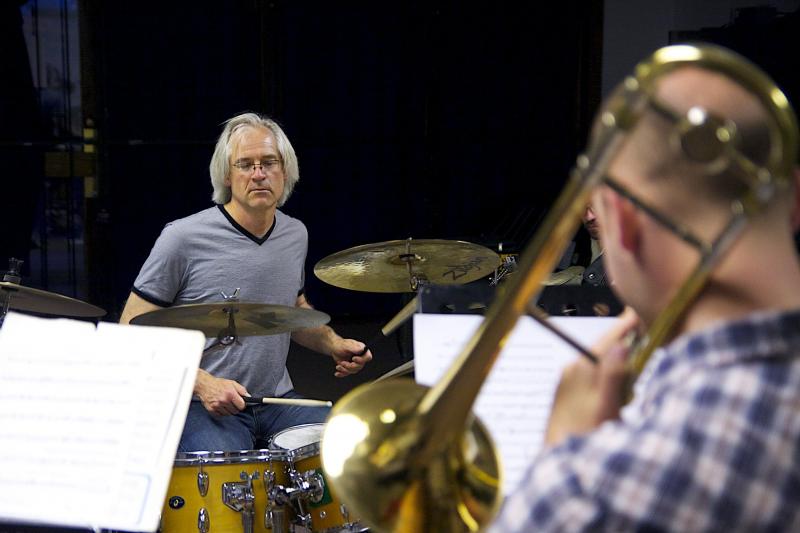 What made you decide to contribute to All About Jazz? I am a music fanatic. I play the drums. I was involved in college radio for years and I'd love to do a show again. Maybe when I retire!

I like to write. It's not easy or natural for me, in fact it's quite painstaking, but I like it. Music is important, and writing about it helps me determine what it is that I value in music; and in all of the arts, really. It's a form of mental / emotional processing for me.

I had written reviews for Jazz Weekly that went out of business after a few years. Somehow, I got cosmically re-routed to AAJ and submitted a few CD reviews back in 2004. Then I quit reviewing altogether. Then I started up again a few years later at another website called JazzReview.com. I wrote reviews for them until they went out of business a year or two ago. Now I am submitting to AAJ whom I sincerely hope remain solvent in perpetuity. :-)

How do you contribute to All About Jazz? I reviews CDs mostly. My philosophy of writing a review is to place whatever music I am discussing in a sort of continuum with other artists' work. Reviewing is about all that I am capable of, journalistically. I have done a couple of interviews for AAJ, but I don't feel that interviewing is my particular strong suit. I am still too in awe of pretty much all musicians. Which is weird because I am also a musician and I am definitely not in awe of myself.

What is your musical background? I have had no formal music studies. Just a year or so of drum lessons. Otherwise, I am an autodidact.

I started listening when I was really young—5 or 6 or even earlier. My older brother played a lot of music for me. I remember hearing lots of Jimi Hendrix, Muddy Waters' Electric Mud, Captain Beefheart's Trout Mask Replica and Frank Zappa's Absolutely Free and all sorts of weird hippie music when I was maybe 8 or 9 and I just loved it all from the git-go. Especially Hendrix and Beefheart. My mother also used to play Stravinsky's The Rite of Spring really loud on the stereo when she was cleaning the house. I just went on from there and quickly discovered jazz. I grew up musically in the '70s and remain fond of the sounds from that time—Mahavishnu, Tony Williams' Lifetime, Soft Machine, Earth, Wind & Fire, Gong, all of the CTI stuff, Gentle Giant, Mandrill, Fela Kuti, anything on the ECM label.

I have a lot of LPs and CDs.

My brother also had a garage band; he's a real rock 'n' roll guitarist and still gigs to this day down in Florida, where he lives. I was about 7 when he started on guitar, and I gravitated towards the drums. I basically just sat down on his friend's kit and started playing with my brother. It was fun, and he basically taught me about dynamics and how to put a song across. I might have had a little talent and decent time, but I also had no discipline whatsoever and after about 6 months of struggling with drum lessons and drum rudiments, I quit and the drums were sold.

After hearing Billy Cobham and Tony Williams a few years later, I became re-enthralled with drumming and joined the school marching band. I played drums on and off until I was about 25 when I decided to really do it right. So I bought a kit, practiced a bit and started pestering my musician friends to play. I haven't stopped since. So, I've been playing in local jazz and rock bands in my home town (Santa Fe, NM) for the last 20 years. Nothing too popular or money-making.

For my 50th birthday, I bought music scoring software, composed some music, and put my own band together. We're called "The Things That Are Heard." It was supposed to be a one-off vanity project, but it turned into an 18 month-long vanity project. It was a fun band, and we actually got to gig a fair amount locally. There are even some decent YouTube videos of us!

I will definitely do more composing in the future. It's also quite painstaking, but the results are often quite... um... unusual.

What was the first record you bought that you would still listen to today? My first LP purchase was Happy Jack by the Who. I wish I still had it. Keith Moon's drumming is epic, and it's just a fun album. "Boris The Spider" was my favorite cut. My second LP purchase was Weasels Ripped My Flesh by Frank Zappa. Great album. There's so much going on in that music, and every cut is completely different from the rest. I have a CD of it somewhere. I'm still listening to [play] this stuff.

What type of jazz do you enjoy listening to the most? The good kind!

I tend to gravitate to the sort of jazz that is intense, loud, thrashy, and virtuosic. Style is less important than emotional intensity and mental / physical energy. I typically default to any sort of jazz made in the 1950s or later. I especially enjoy really heavy funk, avant-garde jazz, free jazz, edgy fusion, and hard bop (Blue Note, etc.). I am particularly fond of European jazz for some strange reason.

I think the most interesting music is being made right now—this is especially true for jazz. To me, the early 21st Century is like some weird Golden Age of Jazz.

Aside from jazz, what styles of music do you enjoy? I enjoy some aspects of pretty much all styles of music. But I still have very definite likes and dislikes within each style. I don't care at all for opera, soft rock, most contemporary dance music (house and garage and that sort of thing) or new age.

Currently I am listening to various sorts of metal, post-rock, funk, African music, dub reggae, and hip hop in addition to jazz.

What are you listening to right now? The last thing I listened to—just moments ago—was Colors by a prog-death-metal band called Between The Buried And Me. Amazing stuff. They write these labyrinthine compositions that burn through all sorts of styles and influences in a really creative and almost whimsical way. Almost like John Zorn's "Naked City" but the transitions are less jarring. But they're incredibly heavy with all the howling guttural vocals and what not. Great band. Incredible drummer, too.

Just before that I was listening—with considerable amazement, as usual—to various tracks from each of the 4 albums by the Japanese band Tipographica. They were together in the mid- to late-1990s, and I consider them to be absolutely one of the greatest bands that ever existed. They were compared to Frank Zappa quite a bit, particularly Zappa's avant-garde instrumental stuff. And while their music is Zappa-influenced, there's so much more going on. Great compositions, incredibly rich and detailed arrangements, and the musicianship is unparalleled. They have a very unusual way of dealing with rhythms—their music is multi-polyrhythmic and continually modulates between 3/4, 6/4 and 4/4 (plus other time sigs) and in different —but related— tempos. Again—amazing, jaw-dropping drumming on all of their stuff.

Before that, while I was running at lunch time, my iPod got into the music of Mihaly Dresch Dudas, a Hungarian tenor saxophonist who richly deserves to be heard by more people. He fuses modern jazz and Hungarian folk musics in a particularly profound and affecting manner. I cannot hear enough of his music.

I've also been listening to the LPs I purchased at the Albuquerque Record Convention, which happened just last week. I did pretty well this year. Favorite finds include an eponymous LP by an Afro-jazz-rock group called "West African Cosmos," Root Down by Jimmy Smith, the first Funkadelic LP, The Right Touch by Duke Pearson, and a couple of Billy Harper LPs whose titles escape me. Billy Harper always slays me.

Which five recent releases would you recommend to readers who share your musical taste? Gamak (ACT) and Samdhi (ACT) both by saxophonist and composer Rudresh Maranthappa—I just saw his quartet perform live and they completely bowled me over. Planet Micro-Jam by the guitarist from Maranthappa's band, David Fiuczynski, is also a mind- boggling listen. Fuze's music seems to blend the most outside, avant-garde influences and the most crowd-pleasing aspects of rock and pop (and folk music) in a really original and personal way. He is an absolute giant—possibly the most innovative guitarist around today.

The Race Riot Suite (Kinnara) by The Jacob Fred Jazz Odyssey—JFJO is one of the most underrated jazz bands around today! This is their heaviest and most nakedly emotional album, ever. It's the core quartet plus a dynamite horn section that includes Jeff Coffin, Steven Bernstein, and Peter Apfelbaum. Killer!

As The Sea (Hat Art) by the Samuel Blaser Quartet—an honest-to-god modern jazz supergroup that has made two absolutely sublime recordings. Music like this is so hard to review because it's difficult to get its essence boiled down into words and sentences. If I were to write what I think, undiluted, about this CD, it wouldn't make much sense.

Finally, there's a great label from Seattle called Table and Chairs Music, and their releases have been knocking me absolutely out. Operation ID's debut album, titled Legs, is my personal favorite of these recordings—a kaleidoscope of post-everything musical insanity and risk-taking. These are kids in their twenties—I can only imagine how great they'll be in a few years!

What inspired you to write about jazz? The ladies. I do it all for the ladies!

What do you like to do in your free time? Any hobbies? Writing CD reviews IS one of my hobbies, as is drumming, composing, playing in local bands, etc. I also run 20-25 miles/week, but that's not really a hobby. It's more for my own sanity than anything else. I don't compete in races or anything. I just run. Without shoes whenever possible.

I have a pretty sweet day job. I am a scientist at a government lab. I have a PhD. in geology, but right now I am doing thermal analysis of various ceramic materials. So, my career's slowly gravitated towards the worlds of materials science and analytical chemistry and away from geology. I still enjoy geology, though. But mostly as a hobby. I'm always down to stop the car at a roadcut and see what's going on in the rocks.

What role does jazz music play in your life? I play it, I listen to it, I think about it, I read about it, I try to write about it, my friends and family are into it, I'll stay up to 4 AM talking about it. So, I am literally steeped in it 24/7.

Oddly, the music I've written so far has little resemblance to jazz.

My teenage daughter claims to "totally hate" jazz, though. Go figure. I think it's a temporary condition, but don't tell her I said that!