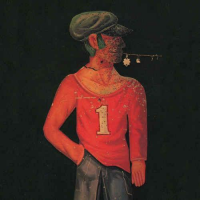 This album of tunes from the cross-border, French-led trio features many elements of their native approaches to improvised music— exploratory experimentation on the boundaries of the respective instruments, solo work of a high order, and a strong sense of playfulness.

The three instruments concerned are all from the middle range of pitch, as suggested in the title, two tenor saxophones led by a cello. As one might expect from the likes of Vincent Courtois (sometime colleague of John Greaves, Sylvie Courvoisier, Dominique Pifarély, and Joachim Kühn to name a few) invention features highly among the selection, even if the album starts with two more conventional, even lyrical pieces. With a palette drawing as much upon pop idioms as any other genre, Courtois leads the investigation of the similarities of timbre between these instruments, sometimes in a playful, frivolous way (hear "Entresort"), other times insistent and discordant (hear "Une Inquietude Discordant")!

The pieces are very independent of electronic interference, relying on the clarity of the recording to bring out the interplay of tension and release between these surprisingly like- sounding instruments. As with their leader, both the GermanDaniel Erdmann (himself leader of Das Kapital) and Franco-English Robin Fincker have a wealth of experience with free-form jazz, and relish the discontinuities and contrasts that Courtois explores with confidence.

If ever there was to be a revival of experimental acoustic jazz-rock this album might be expected to blaze the trail. Exquisite recording makes this experience a treat as one is torn between the rivaling tensions of the players, collectively straining to bear the listener to distant planes of musical existence (as one might expect of a medium), but quite prepared to dump the unwary back on the living room floor, with a chuckle.