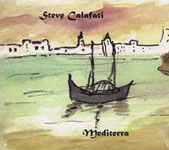 Steve Calafati's trail as a guitarist moved from classical music to jazz and on to rock. He released a rock album in the nineties, but when the Seattle rock scene put his music out of contention, Calafati began studying flamenco music, first in New York and then in Madrid. In 1999 he released his first flamenco album, Volume 1. The new Mediterra is the second, and if it proves anything, it is that Calafati was inspired when he decided to study the music.

Calafati's compositions are beautiful and have that lyrical quality which wafts across and envelops the listener. What's more, he has assembled a band that gives the soul to his music. One cannot discount Calafati's skill as a player. His notes are fluid and clean; they fall in a gentle rush; they shimmer and glow. "Rumba Nove" is one of the prime settings. The rhythm of the rumba flies on the strings of his guitar, but the tune is given a palpitating edge with Arturo Romay in tandem on the cuatro. And when Michele Ramo's violin sways in, her bowing agile and pithy, the allure is complete.

"Magdalena" sits comfortably in the lap of flamenco. The melody captivates, the playing is earthy, and the tempo dazzles. "Canzone per una Bella Moglie" is a slow tune painted in bold shades. Calafita plays the mandolin on this one overdubbed with the guitar, the two in perfect consonance, and Dave Smith's trumpet provides contrast with notes that are deeply etched yet melodic. A very enjoyable album indeed!