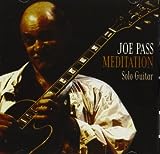 I wonder if Norman Granz ever fully appreciated the talent he accumulated beneath the mantle of Pablo Records. Ella, Oscar, Joe, Bill (Basie), Ray, Dizzy, Milt, Jon and the list goes on. Listening to Joe Pass’ Meditation, a previously unissued live set from Yoshi’s recorded in 1992, I can not help but think how Joe Pass is like another Pablo Alum, Art Tatum. Both artists were thoroughly documented by Granz before their deaths; both were exposed in solo and group performances. Musically, both had the uncanny ability to toss off melodic lines within sophisticated harmonic structures like Byron could throw off stanzas of Don Juan while drinking brandy. Additional, they both had perhaps the broadest Books in jazz.

is a recital of standards typical of Pass during the end of his life. His repertoire varied little, which was easy to accomplish since he played everything. It is a collection of 12 ballads (and if they were not technically ballads, they were all played as such) that highlight the introvert/extrovert dichotomy characteristic of Pass’ playing—at once frenetic and laid-back. Pass painted this performance in Brazilian undertones that bleed through spectacularly on the Jobim title cut and the Brown/Kahn classic "You Stepped Out of A Dream." Pass takes Ellington’s "Mood Indigo" and plays it as if Thelonious Monk was playing his signature stride piano on six strings. "All the Things You Are" is played like a mainstream standard rather what Dizzy Gillespie and Charlie Parker. In this respect, it remains a barnburner, even as a ballad. Pass decorates the tune with single string flourishes that are bright like pansies in winter.

Joe Pass exists as one of the truly singular talents in jazz. There are damn few like him—perhaps Milt Jackson, Oscar Peterson, NHØP, and the rest of the artists that Norman Granz cornered the jazz market with his humble label, Pablo. Let’s hope there is much, much more of this fine music waiting to be released.

Meditation; Shadow Waltz; Mood Indigo; More Than You Know; When Your Lover Has Gone; Everything Happens To Me; It's Alright With Me; I'll Never Be The Same; You Stepped Out Of A Dream; All The Things You Are; How Deep Is The Ocean; They Can't Take That Away From Me. (Total Time: 52:43).