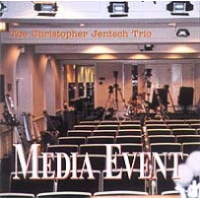 For baby-boomers and their children, the guitar has been the delivery system for most music we hear. Bars never hold air- clavichord competitions for a very good reason. Those six-strings were freedom to a Vietnam generation and a common vocabulary for all listeners. Perhaps the guitar more than any instrument allows beginners and startup bands to get up on stage, and in the case of rock music, get a contract with a major label. In jazz it’s a different story. Fakers beware. Your axe will betrays your abilities just as a young inexperienced Charlie Parker once dodged a flying cymbal.

For guitarist Christopher Jentsch, his credentials are solid, as is his music. With degrees from the New England Conservatory (Jazz Studies), Eastman School of Music (Masters -Jazz Studies), and University of Miami (Doctor of Musical Arts – Jazz Composition), Jentsch can talk-the-talk. With his release of two discs, the large ensemble Miami Suite and the trio recording Media Event, both on the Blue Schist label, he definitely walks-the-walk. Where the University of Miami Concert Jazz Band recording makes broad statements, what Jentsch calls improvisation that has been slowed down, the trio snaps and crackles with a plethora of ideas in a more intimate setting. The disc opens and reprises with the title track, Jentsch’s reworking of “Resolution” from Love Supreme. He infuses a feedback scratch to Coltrane, rocking-out in true baby-boomer style. But this is anything but a rock album. The trio workout a bit of bebop on “Ontology” a few ballads, and a lovely slow version of “Giant Steps” where Jentsch overdubs a guitar on guitar medley. The band works the jazz guitar from Methany to Scofield, through Frisell by way of Martino. Their Downtown inspired “I Still Love you” stops and starts, sorting and shifting genres like a rolodex of a jukebox. Bassist Dan Feiszli shines, especially with stellar solos on “Exploring The Planet” and “Tell Me Your Stories.” Jentsch displays contemporary guitar mastery throughout. Perhaps their rendition of Billy Strayhorn’s “A Flower Is A Lonesome Thing” tells the whole story here. Jentsch patiently unfurls the classic with a delicacy and charm that spans the history of the music called jazz.

When you think of the traditions of the guitar in late 20th century, ‘emotion’ is the word that is often conjured. For Jentsch, add intellect, substance, and style to that guitar-emotion definition.