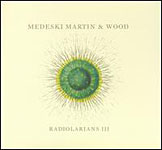 Bonded as if in a purposeful and passionate quest to unite the opposites of discipline and spontaneity, the Zen masters of modern jazz known as Medeski, Martin & Wood have now completed The Radiolarians Series, an eighteen-month endeavor in which the trio composed new original material, embarked on tour to road test it, and then immediately sequestered themselves in to the recording studio to capture its distilled essence.

The third and final installment begins simply enough with "Chantes de Femmes," a smooth interweaving of melody and rhythm. As elaborations on the tune itself coincide with chopping of the beat, what sounds perfectly odd at first—with keyboardist John Medeski and percussionist Billy Martin hard at work—ultimately sounds perfectly natural, with Martin going to his kit just as Chris Wood's bass enters. The spontaneity of the moment is pure—or, at least, sounds that way. This sublime sonic shift engineers the intro for acoustic piano, as the rollicking start turns reflective—almost somber—as the track closes.

The mood reverses again at the outset of "Satan Your Kingdom Must Come Down," as Medeski solos up and down, hard on the ivories, before he's drowned out by a fuzzed-up sound that might be Wood bowing his bass. The soft tinkling sounds of the piano in a classical mode on "Kota" add an exotic texture, while a heavier backbeat, way in the background, leavens the ambient sounds prior to its pastoral passages. This tour-de-force precedes the syncopated organ that introduces "Wonton," a distinctly old-school MMW approach which continues into "Walk Back," where Martin gets to indulge in a distinctly Latin percussion workout. Like most such intervals, it ends too soon—a laudable act of restraint.

"Jean's Scene," then, almost sounds like the reasonable conclusion to the set and may very well be the finale of Radiolarians. But Medeski, Martin & Wood are nothing if not forward-looking, so the funky likes of "Gyro Mi" sounds like a further extension in this streamlined direction for the trio. Engineer and co-producer David Kent aided in preserving an unadorned production approach throughout The Radiolarians Series, upholding an overall continuity while maintaining the integrity of each release. Given this band's history, it would make perfect sense for III to act as a segue to the next recording, where the music will no doubt breathe with a life of its own, albeit in a distinctly different way.