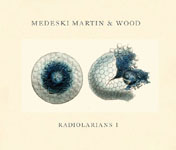 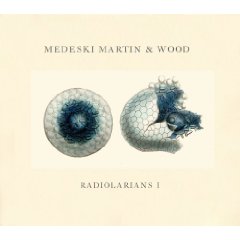 Devised for commercial effectiveness, the traditional record label model is precisely defined: artists write new music, then record that music, then market and tour to spread the word and generate sales. The model is predicated on compartmentalization and a lengthy timeline and most definitely not on leaks and theft—the thriving offspring of the twenty-first century accessibility of music.

But times have changed. With mere mouse-clicks, anyone with an internet connection can turn bottle caps into songs on iTunes. Listeners expect established artists to precede album releases with full-length songs on MySpace pages, while lesser known artists use cyberspace as a defacto record label to mount digital word-of-mouth campaigns. Major bands like Radiohead release an album and let web surfers name their price to download it. The boundaries between the writing, recording and marketing/touring processes are blurring; the old model is stale.

The Radiolarian Series is Medeski, Martin & Wood's contribution to the shake-up; it is their solution to the sluggishness of the traditional label model. With Radiolarians I, the first of three planned releases, they have inverted the normal write/record/tour process, making the album only after touring the material, effectively welcoming the audience into the studio. Pianist John Medeski writes that, "The way that things are supposed to be done is wrong for music, and wrong for the spirit of music... There was music before there was any (music) business. We're just trying to keep it honest, keep it true, and keep the real purpose of music alive." Unrealistically idealistic or not, at least these guys are willing to try something different.

Despite MMW's well documented penchant for hybridized tunes, Radiolarians I emphasizes homogenous ones, albeit as part of an overall musical melange that features electronica, rock, folk, boogie-woogie, punk and jazz-funk. As its title suggests, "Professor Nohair" summons the boogie-woogie and grand piano-funk of Professor Longhair in a tip-of-the-cap to "Tipitina" and its namesake music venue. Though the trio leaves the Professor's soulful crooning to listeners' memories, the song conjures up New Orleanian charm with its acoustic instrumentation.

But Radiolarians I inconsistently delivers the goods. There are tracks, especially towards the end, whose meandering banality suggests they came from a blueprint. Perhaps this comes with the territory: in committing to three albums in under a year (the third tour in the series will occur in November), MMW runs the risk of diluting their creative output.

Ultimately, those unfamiliar with the seminal recordings of MMW—Tonic (Blue Note, 2000), Shack-man (Gramavision, 1996), Friday Afternoon in the Universe (Gramavision, 1995)—should probably not start with Radiolarians I. But for seasoned MMW listeners—and especially the show-goers (of which there are many)—Radiolarians I and its namesake grand project offer an appealing opportunity to sit-in on band rehearsals and participate in the evolution of making an album.