By ERNEST BARTELDES
January 15, 2008
Sign in to view read count 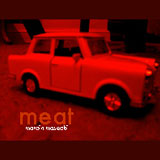 Polish-born Marcin Masecki might have come to the US to further his jazz studies, but he found his muse among his continent's more experimentalist improvisers (though many of his supporters identify Pennsylvania-born Keith Jarrett as one of his influences). Much of what he plays is improvised on the spot, whether performing solo or with Trio Taq (Garth Stevenson, bass; Ziv Ravitz, drums), which came into existence during his time at Berklee College.

His talent is showcased on this recently released disc, which he recorded in his London flat using nothing more than a Wurlitzer piano and a synthesizer. On the disc, he seems to be developing ideas for later use on stage. He opens with his take on Charlie Parker's "Donna Lee," used as fodder for his improvisations; the rest of the disc is mostly the kind of material he does live, drawing inspiration from the moment and his surroundings. The disc goes from slow, almost inaudible synth sounds all the way to far more aggressive riffs, ending the short set (the disc runs for about twenty minutes) with a quick sample of a recording by Delta bluesman Robert Johnson.

At his appearance at New Yrok's Joe's Pub in December, 2006, he came with Taq and both mesmerized and confused many with the music, which was a literal attack on the senses; after the concert, one audience member said that he still had to "figure out if he enjoyed it or not.

The trio began following Masecki as he pounded his Wurlitzer's keys and then suddenly stopped as if to recoup his energy; Stevenson and Ravitz, however, just went on as a duo. Masecki then stood up and reached into the acoustic piano's strings, scratching them until there was a cacophony of sounds. At one moment, a subway train rumbled under the club and the band reacted by hitting their instruments in unison, seemingly adding the feel of the mass transport to the music.

In another moment, the band began a soft melody in which the pianist used both the Wurlitzer and the acoustic. Unexpectedly what could be described as a musical dream evolved into a nightmare—Stevenson ran the bow over his bass strings while muffling them with his left hand and Ravitz went into a wild series of drum sounds, adding as many percussive elements to his drum kit as he possibly could.