By MARK SULLIVAN
March 6, 2018
Sign in to view read count 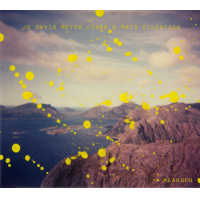 Norwegian guitarist Jo David Meyer Lysne and double bassist Mats Eilertsen make their debut as a duo here. Meyer Lysne is a young player with a very individual approach to the acoustic guitar; Eilertsen is a veteran with over a hundred recordings on his resume, experience that really helps to bring Meyer Lysne's concepts into focus. This is an acoustic project at its core, but both performers also employ electronic effects to expand the possibilities of their instruments. Recording and mixing by Jan Erik Kongshaug at Rainbow Studio (home of so many beautiful ECM recordings) gives the results the perfect presentation.

The opening track "Intro" gives notice that this will not be a standard acoustic date. A collective composition, it is very atmospheric, almost an electronic study. "Sluten" (the first of the Meyer Lysne compositions) begins with his unmodified acoustic guitar, a contrast that establishes the range of the album. The title tune is also guitar oriented, with a folkish, Americana tone.

"Åpning" employs 12-string guitar with cathedral reverb; Eilertsen plays high harmonics (as he does many times during the album), subverting the bass role into high lead voice instead of low accompaniment. "Svømmer Over" is a waltz, and a straightforward, lyrical acoustic duet. "Duolian" is another beautiful Meyer Lysne piece, which gives Eilertsen space for an extended bass solo. During "Meso" he switches between conventional accompaniment and high atmospherics. Closer "Uro" is an atmospheric electronic bookend to the opening track.

Meander could be described as a series of miniatures. Only one track exceeds the four minute mark, and the entire album is only 30 minutes long. But it is a rich, full listening experience. It has a gem-like focus that belies its title.