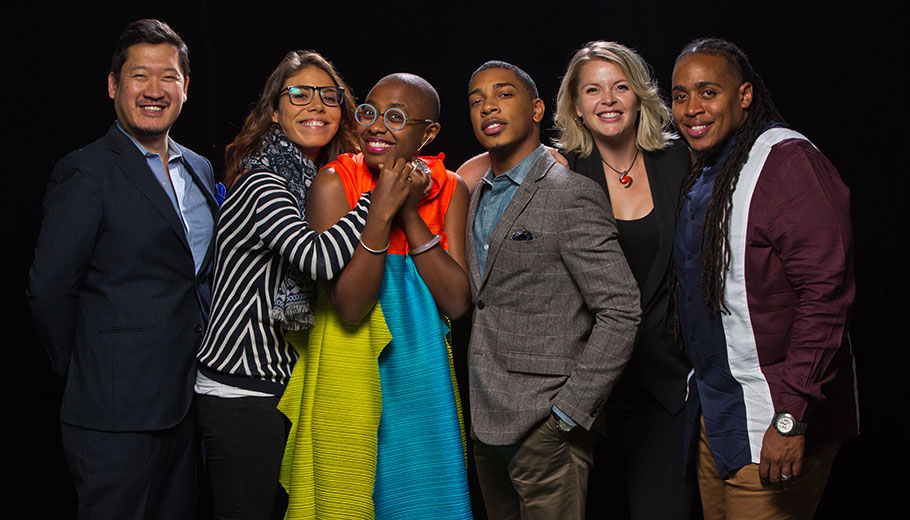 While some jazz festivals sponsor tours that highlight their more seasoned icons, Monterey was different in featuring recently matured millennial musicians at the center of newer but still mainstream developments in jazz. They performed as an ensemble specifically for this tour.

Featured vocalist Cecile McLorin Salvant has been hailed as the finest singer of her generation. Pianist and music director Christian Sands served as host and set the stylistic tone for the group. Canadian trumpeter and singer Bria Skonberg brought in echoes of the past in her style of playing, having been mentored by Warren Vache. Chilean-born Berklee graduate Melissa Aldana has been influenced by Danilo Pérez and George Garzone, and showed herself to be a modern creative force on tenor saxophone. Jamison Ross played drums with relaxed authority, and his countertenor vocals could earn him an instant contract at The Met. Bassist Yasushi Nakamura played with demonic force and improvisations calculated to amaze. All six musicians contributed original compositions. Rather than homing in on a particular genre, they delivered an exciting show that exemplified diverse forms and ideas.

Salvant, strongly influenced by and sometimes considered a successor to Sarah Vaughan among other great ladies of song like Billie Holiday and Ella Fitzgerald, uses her voice as a finely-tuned instrument. She has assimilated much of the jazz vocabulary and stylistic nuances of past singers into her own style, and she projects these influences forward with consummate skill and panache, without a wasted note or trivial phrase. She began the evening with two of her own songs, the ballad "Fog" and then the livelier "Sack Of Dreams," showing her exquisite control, Vaughan-like wide range through deep low and resonating high notes and subtle sonorities conveying emotions. She took Betty Carter's "I Can't Help It" with just walking bass and piano accompaniment, making the young Miss Carter come alive again in her phrasing and dips into the South. She returned later with virtuosic grace on another original ballad, followed by a blues sequence with Aldana that was performed with balance and delicate interaction.

Aldana's composition "Elsewhere" included her superb modal improvising and frequent nods to Wayne Shorter. Sands's sophisticated piano comping included trills with subtle harmonies and a minimalist feeling evolved from contemporary composer Steve Reich's use of repetitive loops. Drummer/vocalist Ross then wowed the audience with his original "Safe In The Arms of Love." His stunning voice reaches for the stars with more than a hint of Stevie Wonder. The fascinating lyrics were about giving hope to the homeless and other lost souls on the streets of modern cities. Many musicians today convey messages of social change in their songs.

The centerpiece of the evening consisted of Sands's piano version of "E Lucevan Le Stelle" ("And the stars were shining") from Puccini's Tosca, an aria reflecting the opera's melodrama and including long trills that convey a sense of endless time. Sands could claim being a successor to classical/jazz pianist Don Shirley, whose story was featured in the film Green Book.

Topping off the show, Skonberg's virtual production number "High Hat, Trumpet And Rhythm" honored '30s trumpeter/vocalist Valaida Snow and captured the era's Harlem big band feel. Doing double duty like Ross, she sang with the fervor of Ethel Merman and improvised beautifully on trumpet, adding a bebop complexity to the mix: a combination of Harry James and Dizzy Gillespie, if you will.

The music was exciting, at times enchanting. It was richly diverse and creative in its use of styles and themes across the spectrum. Yet one disconcerting aspect of the show was the performers acting as if they were proud graduates of a jazz studies program and not the seasoned players they are. It may have been an artifact of the conceptual over-emphasis on their youth, but their youthfulness was not representative of the Monterey Festival as such, which always includes performers from across generations. It might have been better if the festival at least one musician with more years under their belt. Jazz transcends generations.