Bill Mays: Mays at the Movies 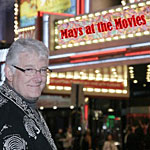 Bill Mays has spent much of his career as a first-call studio pianist in Hollywood, accompanying singers like Sarah Vaughan and Al Jarreau, and playing on movie soundtracks. Moreover, his most recent CDs have involved his innovative third-stream group, The Inventions Trio, with trumpeter Marvin Stamm and cellist Alisa Horn. As a result, Mays's profile may be a bit lower than some who spend more time in the jazz performance spotlight. But he's also one of the most intelligent, fluent, and interesting players around. Mays never mucks with a tune just for the sake of putting a personal stamp on it—there's always the sense that thoughtful creative choices have been made

For example, in the opening "I've Never Been in Love Before," Mays changes the chord center four times, which not only adds new dimensions to an overplayed tune, but musically captures the blissful disorientation of the first-time lover. Similarly, on the next warhorse, "The Shadow of Your Smile," Mays's elegant, succinct playing strips years of schmaltz from the song; with the addition of the verse, he helps highlight its original beauty. Mays's compositional gifts are also on display here with the spirited "Judy," the tribute to his wife that's been heard in two movies so far.

The delightful Willie Wonka anthem, "Pure Imagination," has some temporal twists that bring out its lopsided structure (that nine-bar bridge, for instance), while this band digs deep into {Michel Legrand = 8674}}'s "The Summer Knows"—usually played as a ballad—and swings it hard. Mays also does his homework, going back to Alex North's version of his "Love Theme from Spartacus" to restore what many other pianists, including Bill Evans, choose to cut from the piece.

Given the consistently excellent quality of this music, it's surprising that this group didn't rehearse—until you consider the caliber of bassist Peter Washington and drummer Billy Drummond, both busy, classy players who enhance any number of trio recordings. The artful delegation of their splendid solos adds color on tunes like "There's a Small Hotel" and "Charade," the burning closer, as does Mays' playful but subtle quoting. All told, Mays at the Movies is a thoroughly engaging CD, providing more evidence that Mays's position in the top tier of pianists remains secure.

I've Never Been in Love Before; The Shadow of Your Smile; Pure Imagination; Love Theme from Spartacus; Judy; The Summer Knows; There's a Small Hotel; You Leave Me Breathless; Charade.