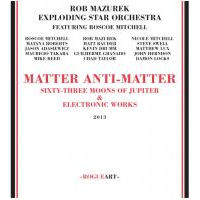 When he was under contract with Arista in the 1970s, reedman Anthony Braxton discovered that he was able to slip under the rug the release of some of his less commercially viable works, such as the mammoth For Four Orchestras (1978), by alternating them with more traditional quartet material. While electro-acoustic composer and cornetist Rob Mazurek won't be pulling the wool over anyone's eyes at the Paris-based Rogue Art imprint, he has achieved a similar outcome by coupling two opposite ends of the sonic spectrum on the double CD set Matter Anti-Matter.

For the disc likely to garner the most interest, Mazurek offers Sixty-three Moons of Jupiter, the fifth outing by his Exploding Star Orchestra featuring AACM stalwart Roscoe Mitchell as part of a 15-piece aggregation of talent from Chicago and Brazil. Recorded live in 2009 in Sao Paolo, this edition of the band forges a dense, percussion heavy sound, leavened by intersecting riffs, muttering electronics, choppy electric guitar and sporadic vocal interludes. Groove-based structures establish a good time celebratory feel, at times recalling antecedents such as Chicago-era Sun Ra.

ADVERTISEMENT
Mazurek fashions primarily an ensemble music from which occasional solos reach escape velocity during the suite like series of continuous performances. The leader's cornet takes pride of place above an airy groove on steroids on "Europa" while an uncredited bass clarinet (probably Matt Bauder) holds forth in sinewy splendor amid a juddering tribal shuffle on "Callisto the Bear." With such an extensive horn arsenal on hand, special guest Mitchell can be hard to pick out and doesn't appear more prominent than some of the other reeds, although his angular intervals pierce the exchange which emanates from drifting atmospherics on "Almathea is Red." Although the titles are inspired by the moons of Jupiter, the lyrics by Damon Locks don't supply a matching shared theme, as they range so wide as to even include an account of boxer Muhammad Ali's clash with the titular fighter on the lilting "Himalia a Metaphor for Joe Frazier."

The second disc couldn't be more different, comprising as it does solo electronic works by Mazurek, which contain neither meter or melody. Rather each of the five cuts in the 48-minute program features slow moving ambient soundscapes. "Cryogenics After the Land of Spirals" revolves around a shimmering white noise with metallic overtones out of which washes of other textures emerge, invoking analogies such insect like hums, radio signals from another galaxy, and digital raindrops. Abrupt shifts between modes characterize several of the pieces, although "Pondering the Hidden Light" remains in the territory of a wafting organ chug decorated by what might be synthetic birdsong. "Ascension Dream Phoenix" builds up to a crescendo of white noise evoking a massive waterfall, before fading to silence. Common ground between the discs proves hard to find, but that likely misses the point in this Janus-like portrait of Mazurek's concerns.

63 Moons of Jupiter Disc 1: Lo and Volcanic; Europa; Ganymede and the Ice Parade; Callisto the Bear; Himalia a Metaphor for Joe Frazier; Almathea is Red; Elara Beneath the Underground; Pasiphae Gives Birth to the Minotaur; Solo Electronic Works Disc 2: Cryogenics After the Land of Spirals; Pondering the Hidden Light; Stalking the Spectrum of Inevitable; Last Breath on the Forgotten Planet; Ascension Dream Phoenix.