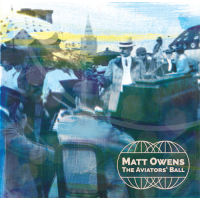 From the vibrant Manchester jazz scene that gave us the likes of Matthew Halsall, Nat Birchall and GoGo Penguin comes this eclectic beauty from Matt Owens. Much of the album was written in response to a commission from the Manchester Jazz Festival for a 'jazz quartet combined with wind quintet and tuned percussion' -a wide ranging brief that has plenty to enthral the more open-minded music lover.

Taking the melodic spirit of late 1960s Beach Boys LP "Friends," the Penguin Cafe Orchestra and maybe even the Free Design the album has a light, airy cinematic feel that allows the individuality of each wind instrument to emerge. There is an easy sophistication and gentle tunefulness that makes the album an immediate hit -opener "Raindrops on Our Rooftops" could be anything from a lost soundtrack to "Billy Liar" to a late 1990s High Llamas instrumental. It works as the soundtrack to an idealised past that could perhaps be taken as a post-modern comment on more innocent times, yet more importantly succeeds through the arresting simple beauty of the wind instumentation. On the aforementioned "Raindrops..." the mix is capped off by the well judged addition of Neil Yates' tin whistle, not an instrument that usually garners much love in jazz circles. Yates, perhaps best known for his work with national treasure Kate Rusby, also adds some evocative trumpet lines to tunes such as "The Peanut Ball," that takes the Vince Guaraldi Trio's famous bass line as its starting point, or the immense "Going Back to the Village." The latter is driven by a purposeful bass line from Owens himself and a beautiful cascade of a piano solo from Edward Barnwell. The vocalese from co-producer, and singer songwriter in her own right, Kirsty Almeida provides an uplifting counterpoint that takes the piece into the stratosphere.

While predominantly instrumental the album scatters three vocal tracks amongst the overall nine which allows Owens to shift the listener's focus slightly, varying the sound to keep the ears fresh. Best of these by a short head is Tom Davies singing his own melancholic "Mouse Song" while the wind quintet weave their spell around him. Zoe Kyoti's contemplative "Monsoon" and Riognach Connolly's haunted take on the traditional "Black is the Colour" more than pass muster, with Yates' trumpet solo seeming to expand the acoustic space available in defiance of the laws of physics on the latter. These vocal tracks work well pacing the collection and adding to the range of sounds and emotions conveyed.

The collection's title commemorates a ball held by the Aviation Society in Prague, which in its delightful title track is the sort of thing the young 'Northern Star' era Groove Armada might have made had they grown up listening to the Penguin Cafe Orchestra rather than the late Frankie Knuckles. The cover of the collection too echoes the attention to detail in the music, being a picture of a ball on the roof of the Midland Hotel Manchester around the turn of the twentieth century. To this have been added impressionistic slashes of blue and yellow colour that are extremely effective -they emphasise that while the contents will not be a simple attempt to evoke past styles and formats there will be elements from different eras in the blend.

This is a musical blend that works remarkably well -some albums take a while to reveal themselves, this has an instant positive impact that has not faded over weeks of listening. Matt Owens has crafted interesting and intricate arrangements and compositions with the help of this extensive, high quality, ensemble and clearly thought about the way that the home listener will experience them. Add the fantastic instrumental contributions from the key players and you have an album to cherish. Absolutely wonderful.

Raindrops on our Rooftop; The Aviators' Ball; Mouse Song; Going Back to the Village; Every Wish is for You; Black is the Colour; The Peanut Train; Monsoon; Violet.