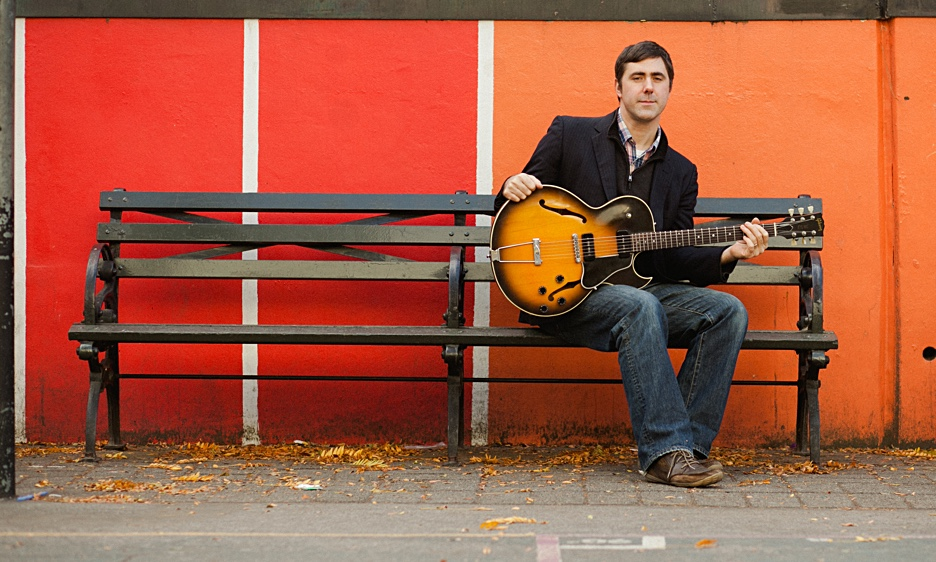 There's the broad idea of family. In addition to the one you're born into, you sort of develop [another one] over your life and career, spending time with people on the road or doing long recording projects. You spend so much time with people and you get to know them in such a deep way. The music you experience with them can be so intimate and personal. I think of them as family, in a way.

If there's a defining trait to be found in the value system guiding guitarist Matt Davis and his music, it's most definitely a healthy respect and admiration for kith and kin. A love of community and belonging drives nearly every aspect of this artist's life, including his flagship ensemble, Matt Davis' Aerial Photograph, and it speaks ever so clearly on the aptly named Big Family (Self Produced, 2019). This long-awaited album, visiting music from the past while highlighting tight bonds and relationships, is but a microcosm in reality, encapsulating Davis' passion for people, collective expression, and connective action in a single package. And it's a statement reflecting on the long game endemic in a music career. "The record is a mix of songs I've written over the last 15 years," Davis notes. "The tunes were all written and/or arranged at very different times in my life—while I was living in Philadelphia, New York City, and, for a short time, in Amsterdam. Also before and after getting married and before and after I became a father. Somehow these songs have all stayed with me through these big changes and still feel meaningful and relevant in my life. They feel very personal at this point."

The name Big Family, while autobiographical in nature, holds broader implications for its creator. "[It's] definitely a reference to my own big family growing up, but also the increasing importance I place on connecting more deeply to the people in my life; people who have grown to become like family. [That's] mostly musicians that I've spent a ton of time with, but also teachers, students, and people to whom I've grown close while having a crazy life in music. These relationships have endured, and I wanted to somehow reflect that in this record." Incorporating eighteen of those musicians into his work for the occasion, and blending horns, strings, rhythm, and, occasionally, vocals in the process, Davis built on and refined various signatures at the root of Aerial Photograph's music—cycling motifs, poetic notions, story-driven ideals, an appreciation for breathing room, a strong sense of groove, and lyrical lines, to name a few. In order to better understand how those markers even formed in the first place, it's instructive to delve deeper into the past.

Growing up as part of a bulging brood in Stockton, New Jersey, in the '80s and early '90s, Davis understood the value of family long before he could even walk or talk. "I'm the youngest of seven," he shares, "and I grew up on a farm. My grandmother lived there as well, so there were a lot of people in the house." Music wasn't exactly a primary pursuit in that homestead, but it still made its way through the family. "I have an older brother who plays guitar," Davis explains, "and he was really my first exposure to the instrument." That early influence would inspire the most junior member of the pack to take up guitar before he was even 10 years old. But according to his reminisces, jazz wasn't even on the radar at the time: "Oddly enough, I was listening to Chuck Berry and a lot of oldies. When I entered high school I got a good teacher and got into rock and roll. And then, right around junior year, I started to get exposed to jazz. From there on out it was mostly jazz." By the time senior year was in sight, Davis began to eat, sleep, and breathe music, seriously studying both guitar and flute. "Mornings before school I would wake up and play, if I had a free period at school I'd practice, and after school I'd be playing late into the night," he recalls. At the same time, a steadily evolving diet of music touching on everybody from Ray Charles to Yusef Lateef and Rahsaan Roland Kirk to Joni Mitchell helped to expand Davis' horizons as one of life's key chapters neared its close.

When high school came to an end, Davis chose Temple University in Philadelphia as the next step in his music education. Both the school and the city would come to serve as his classroom in the years that followed. By day Davis would follow the prescribed course of study, but at night and on the weekends he'd hit the town and soak in the scene(s). Dropping into venues like The Painted Bride Art Center, Chris' Jazz Cafe, and Ortlieb's, he began to absorb jazz of various shades and perspectives, connecting with everybody from bassist Tyrone Brown to drummer Mickey Roker to pianist Dave Burrell. An appreciation for both straight-ahead styles and left-of-center ideals fueled his fire while the accessibility factor surrounding these musicians allowed for absorption at a first-person level. "It was a really amazing time," Davis shares, "and I could just go to school and have little odd jobs here and there, but really have a lot of time to work on music, learn, and get the history and the tradition." In some cases, as with Davis' experiences with saxophonist Odean Pope, informal mentorship led to musical relationships on the bandstand: "I ended up playing with Odean. At first it was just that he had this workshop for saxophone players. And when I was a freshman at Temple I would go to these weekly gatherings. Then I started to play for the workshops, and then that sort of evolved into us playing gigs in and around Philly." At the same time, other important connections formed and helped further Davis' artistry. Through a suggestion from saxophonist Bobby Zankel, for example, he began studying with legendary jazz pedagogue Dennis Sandole, who supplemented the more traditional college jazz curriculum through the use of modernistic methodology—"more angular progressions and intervals" that helped expand a musician's tool box.

Toward the end of this period, while Davis was building a skill set, vocabulary, and approach that would serve him well upon graduation in 2001, the seeds that would sprout into Aerial Photograph were sowed. "When I was finishing at Temple, in something of a music appreciation class, one of the pieces we listened to was the Ravel String Quartet. And when I heard it, and the way Ravel uses motifs and transitions and dynamics and harmony, I just totally fell in love. It was the first time I heard a classical piece that made me feel the same way I do about jazz," Davis notes. "So I started to explore that a little bit. And when it came time for my senor recital I decided to have a jazz trio augmented by a string quartet. That was sort of the impetus or the starting point for Aerial Photograph." The initial shape of the music took form right there in Philly, but the name and philosophical approach connect back to Davis' home. While spending time at the family farm during summers and college breaks, he would hunker down in the finished basement to practice and write some of the early material for this band. And right there he found the inspiration: "It was a large aerial photograph from 1956. I think it was probably taken for tax purposes, and my grandfather had it framed and it was just sort of sitting there. It really started a big picture approach to music and creating and connecting with others; a larger perspective or a greater frame to sort of view and present thoughts."

Using his senior recital as a launching point, and having found an umbrella concept to suit his bird's eye outlook, Davis would continue to pour his passion into the band while building his career in other directions in Philadelphia. All manner of sideman gigs and a thirst for new music would artistically spur him on, and a teaching position at The University of the Arts, which started around 2005 and continues to this day, would help broaden his passion for paying it forward. At the same time, Aerial Photograph was playing and evolving. The band's eponymous debut was recorded in 2002 and released a year later, and the follow-up—Before The Stars Burn Out (Self Produced, 2006)—arrived just a bit further down the road.

Those two foundational projects proved essential in the learning process, helping Davis to codify and refine his writing for this outfit, but neither one would define him or his music. "I sort of changed my approach after those records and started putting in more socially-influenced ideas and audio clips of conversations I had with people. The whole process of writing music based on social interaction became a major part of how I compose for that group," he notes. In 2008, that shift in musical mentality would lead Davis to put together a massive project dubbed City of Philadelphia: "Every month I would go out into the community—a different community—and I would engage with people and have conversations with them and learn about their lives. I would record the conversations, write music based on those conversations, and then we would do a performance of that new music every month. And it was different people from all walks of life. January was senior citizens, February was people dealing with alcohol recovery and drug addiction, March was immigrants, April was children. There was also [a month for] teachers, and veterans, and incarcerated people." This project and the performances, which featured recorded clips from the interviews, resulted in the development of more than 100 pieces of music by year's end. Davis then cherry-picked his favorites from the dozens of those that had been recorded, packaging them as Ways And Means (Self Produced, 2009). It's an album that he's immensely proud of, and it ultimately inspired him to revisit the concept with City of New York in 2013. Unfortunately, it didn't get the notice it deserved. "It was a funny time [when I put out Ways And Means] because I had moved up to New York, I was still teaching two days a week in Philly, and I was in the Master's program at the Manhattan School of Music, which was like a full time job. I didn't have a lot of time, so that record, in a way, feels like it got away from me. We released it and I did a CD release party and got the word out a bit, but I kind of just moved on."