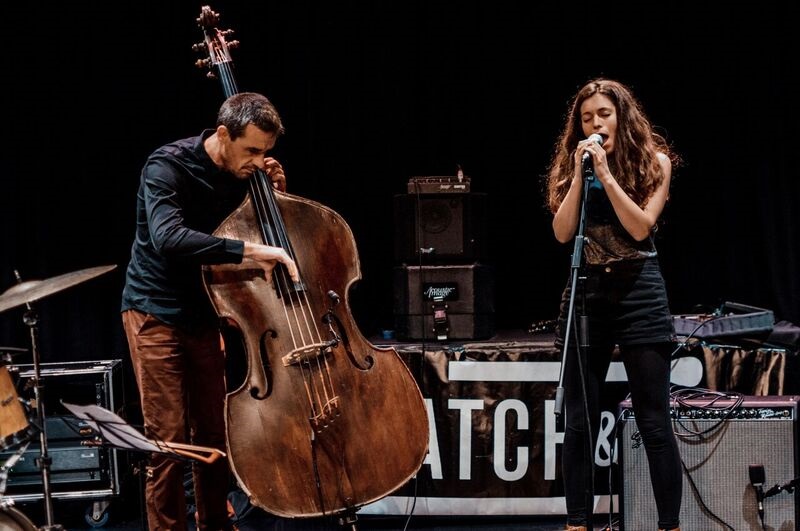 By IAN PATTERSON
September 24, 2017
Sign in to view read count

"We are Rocky Road and we've existed since Wednesday," bassist Anneleen Boheme announced to the Saturday afternoon audience of the first Match&Fuse festival to be held in Ireland. Well, we're used to pop-up shops after all, so why not pop-up improvised music?

Match&Fuse was conceived by London musician/promoter Dave Morecroft in 2011 as a festival and touring project to promote some of the most exciting and adventurous underground bands across Europe. There are some similarities to the model established by 12 Points, though Match&Fuse has its own distinct character—the main difference being the collaborative character of Match&Fuse, which connects European collectives, improvised scenes and producers, drawing on an ever-expanding network of booking agents, artist management agencies, promotors and record labels.

Reciprocal tours and double-bill tours have given bands the opportunity to play outside their established territories to new audiences.

And, unlike 12 Points, there's no application process for participating musicians in Match&Fuse recommendations from within existing networks on the suitability of musicians suffice. To date, Match&Fuse has annually rotated a fairly traditional festival model—that's to say, with a number of participating bands—in Norway, Italy, Poland, France and the UK, but there was little traditional about the format of the first Match&Fuse in Ireland, held in the picturesque seaside town of Dun Loaghaire, County Dublin.

Director Matthew Jacobson [of AERIE and ReDivideR fame] spoke of the inherent appeal of Match&Fuse: "As an artist myself, as a musician, the thing that always interested me about Match&Fuse was meeting other musicians, learning from each other and sharing everything."

To that end, Jacobson took the bull by the horns, by pushing the collaborative ethos to the max. He invited nine musicians from continental Europe and three from Ireland—most of whom had never previously met each—and 'fused' them into three groups. Three days of rehearsals later, they were stuck on stage before a paying public to improvise.

To build a festival around such a concept was a bold move, and perhaps it was no coincidence that the event was scheduled between 2pm-5pm, so that there were no hard choices for the public between, say, Sunday lunch/dinner and several hours of improvised music.

The approaches taken by the various groups to the task of becoming stage-worthy—revealed to varying degrees during the performances and related in conversation with the musicians afterwards—provided an eye-opener into collaborative philosophies and functional group dynamics at work.

Guilfoyle described how his group's collaboration had evolved during rehearsals. For the first half day, he related, the band had worked with written material, but this approach hadn't proved entirely satisfactory. "We were interacting, but it felt like we were roughly on different pages," admitted Guilfoyle. "In the second half of the day we said 'Forget about it, let's just play,' so we kind of threw out most of the written material and then we started working on this whole theme thing. Adding one little thread of an idea -it really brought us together."

The 'theme thing' involved the audience, pre-gig, jotting down a theme on a piece of paper. During the performance the group randomly selected themes and improvised accordingly.

Guilfoyle's pedals engineered an otherworldly ambience on "Waiting for Santa Claus"; "Anyone for Tennis?" saw a back-and-forth exchange between the guitarist and Gaudre's echoing soprano saxophone; "Girls Dancing in the Grass to Attract their Dinner" elicited a sense of hilarity and inhibition over strong rhythmic pulses, the quartet eventually falling into a collective groove; "The Sea," meanwhile, provoked a fascinatingly impressionistic response bordering on the psychedelic.

Even if the themes hadn't been named—and in doing so perhaps placing subconscious meaning on the music for the audience that mightn't have suggested itself otherwise—what was undeniable was the quartet's chemistry, whereby most of its improvisations could easily have passed as fairly sophisticated through-composed pieces.

The trio's uninterrupted half-hour improvisation unfolded like a conceptual suite, with great contrasts within the evolving textural and emotional landscapes. Electronic soundscaping and real-time sampling meant that at times, with or without eyes shut, the provenance of the experimental sounds wasn't always clear. What was clear, however, was the powerful overall effect.

Desprez's highly percussive guitar soundings ranged from quiet croaking and bell-like chime to riffing waves like a desert storm. In a stirring climax, all three musicians converged as one in an enveloping wall of sound—a supersonic drone— that gradually diminished, as if by design, to reveal once again its component parts.

Afterwards, the three musicians explained this group's approach to collaborative music-making. "On the first day we played to meet each other and then during the week we did some exercises in length," said Cassiers. Desprez picked up the thread: "It was kind of like a set list, but of minutes. We decided the duration, the shape in a way, but not the content," expanded the guitarist. "We also played for fifteen minutes on only one idea," added Holsen, "just to see what we could do with that."

Of the three groups, this final one proved to be arguably the most harmonious—when wordless vocals, saxophone and bass clarinet struck sweet spots—and the most outré, with the magnetic Heidelberg's wholly improvised passages oscillating between operatic high-wire and Beckett-esque darkness of the soul.

Extremes in dynamics embraced, at one end, tip-toeing rustlings, where bass and drums were felt rather than heard, and, at the other end, explosive collective outbursts of punkish energy. In between, there were moments of choral-like synergy, free-jazz rumblings, passages of curiously rhythmic abstraction and, in turn, of gentle lyricism.

But this was essentially a restless beast, and from the moment Heidelberg picked up her electric guitar and began sculpting jagged, Crimson-esque funk, the music took on a new energy. The ensemble became increasingly industrious- -and more closely attuned—as the music reached its most hedonistic and visceral, culminating in a thrilling unison crescendo.

Afterwards Heidelberg shed light on the piece's structure by highlighting cues—a melody or rhythmic motif—that steered the band from one segment of the improvisation to another. For Heidelberg, as for all the participating musicians, the four days had been challenging but rewarding. "It's been really intense, but in a very positive way, "she enthused. "Totally inspiring."

An emotional Jacobson dedicated this edition of Match&Fuse to the memory of Eirik Tofte, who passed away in 2013. Founder of record label Va Fongool and promoter, Tofte was the Norwegian Match&Fuse co-producer, overseeing a number of successful Norwegian tours in addition to running Match&Fuse Oslo 2013.

Jacobson also heaped praise on the twelve musicians who made Match&Fuse Dublin 2017 such a success. "They're an amazing bunch of people. They didn't really know each other at all so they've taken a real leap of faith coming here. Hopefully it will go on from here."

Arguably, it was also a leap of faith for the audience to take a chance, not just on unknown bands, but on improvising bands that hadn't even existed four days earlier. Then again, in its short life to date brand Match&Fuse has earned a reputation as one of the more exciting contemporary European musical endeavours -a courageous alternative to the staid, the formulaic and the prefabricated.

In bringing different nationalities together to play largely genre-defying improvised music across Europe, Match&Fuse makes a passionate and very timely case for the notions of strength in diversity and of all pulling together for the common good.

Match&Fuse is already something of a moveable feast so it could well be that varying formats promoting both composed music and improvised music, or established bands as well as pop-up bands, may become the norm. Whatever lies ahead for Match&Fuse, however, the twelve musicians of Match&Fuse Dublin 2017, in seeking and working towards a common language, have just raised the bar.