By HRAYR ATTARIAN
February 24, 2015
Sign in to view read count 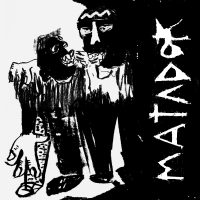 Guitarist and singer Santiago Bogacz's, stage name Matador, second eponymous EP can easily serve as a score for an independent, art house, film. As with his first release Bogacz continues to explore and fuse Americana and Latin motifs but the current disc is thematically more cohesive and has a definite dramatic atmosphere.

On "Sin título #3" for instance, thick guitar chords simmer underneath his evocative vocals. Flamenco tinged phrases meld into the bluesy music creating a haunting and tense ambience. His hypnotic strums on the onomatopoeic "Briumbambumbeum" stylistically hark back to the rawness of Mississippi delta sounds while his wordless throat vocalizing, eerily similar to tuva singers, brings a mystical intrigue to the tune.

A rough-hewn acoustic rock feel permeates the organic melody of "Al Norte." His plaintive and expressive singing wails over the energetic and intricate instrumental phrases the he lays down with remarkable agility and litheness. The resulting cinematic mood is one shared by all of his compositions on this album but particularly with the concluding "Padié (para los amigos)." The most folkish tune on this recording, it also has a conspicuously narrative structure as it flows like an intimate and lyrical poem. The strings create a series of brightly shimmering vamps that ebb and flow with elegance and grace. There is delightfully dark and indigo tinged undercurrent that gives the piece a stimulatingly mordant edge.

Bogacz, clearly, is superbly talented and possesses a unique musical vision that has better crystalized with his sophomore effort. The Montevideo native is an accomplished composer and performer and these two short and quite superlative works, hopefully, are just teasers for a longer more comprehensive record that he is yet to produce.