Masters of American Music: The Story of Jazz 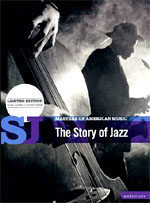 Various documentaries have been made about jazz over the years with mixed results. While the 1993 DVD Masters of American Music: The Story of Jazz is only 98 minutes long, it ends up being far more wide-ranging, less repetitious and better written than the much longer and somewhat controversial Ken Burns' Jazz released the following decade. The Story of Jazz covers the early cross-cultural roots of jazz then every major style by blending focused writing, plus careful choice of photos, music, film, video and interview subjects.

One of the strengths here is a focus upon the musicians who played during an era mentioned, often having worked with or been influenced by the players they discuss, instead of artists who weren't even born during the style's heyday or on long-winded writers. Of course, a number of respected jazz journalists, among them Gary Giddins, Howard Mandel, Albert Murray, Dan Morgenstern and others (though none of them are heard or seen on camera) were involved in interviewing these jazz greats, many of whom have passed away since the initial release of this DVD. Fortunately errors are at a minimum (though it is funny to hear Barry Harris call Monk a prolific composer by comparing him to Ellington). The Story of Jazz is the rare documentary that holds one's attention while encompassing a remarkable scope of subject matter.