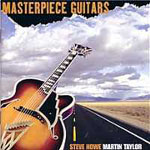 The story of Masterpiece Guitars is nearly as interesting as the music itself. Scott Chinery is a guitar collector—someone who just loves the look, the feel, the sound, everything about the instrument—in particular the acoustic or, at worst, hollow body electric variety. There's nary a Telecaster or Les Paul to be found in his collection, but you will find an incredible collection of D'Angelicos, Strombergs, Gibsons, Martins and more. Chinery asked Steve Howe, best known as the guitarist for the British progressive rock group Yes but a player who has shown an ability to play everything from ragtime to flamenco over the past thirty years, to record an album with his guitars. The idea rose to even greater possibilities when jazz guitarist Martin Taylor hooked up to create a project that is the sonic equivalent of a love letter to the instrument.

The untrained ear would not be expected to appreciate many of the subtleties and sonic nuances that differentiate the multitude of guitars that are used on this recording. Fortunately Howe, Taylor and Chinery have not only listed each and every guitar used on every track, they've identified the function of each guitar, and included pictures of the instruments to boot. And so it becomes possible to appreciate the distinctive personalities of all the instruments used and understand some of the reasons why specific instruments were chosen for particular musical roles. On "Blue Bossa," for example, Taylor plays a simple rhythm track and then layers solos by no less than eighteen guitars—with their positions listed second-by-second in the liner notes—laying waste to the naïve concept that a guitar is just a guitar.

The material ranges from pretty duets like "Two Teardrops," where Howe and Taylor utilize D'Aquisto Teardrop model guitars, to solo pieces including the folksy "Ginger," where Taylor uses a Larson "Big Boy" Stereo guitar to create a sound larger than life for one instrument. Other tracks involve the two players either alone or together layering multiple guitar tracks to build a semblance of a guitar orchestra. On "Tailpiece" Howe uses no less than seven tracks to build a miniature guitar suite that ranges from gorgeous ambience to an almost bluegrass feel using a Gibson Banjo Guitar.

That Taylor and Howe are exceptional guitarists is without question. Howe, in particular, though, never ceases to amaze. Within the context of Yes he can sometimes feel sloppy and a bit forced, but here, as he pays tribute to the instrument that has given him a lifelong career and purpose, he is completely relaxed and his playing is smooth and seemingly effortless.

The entire record would, on its own, be a beautiful example of the diversity of the guitar, stylistically, texturally and sonically. But when combined with the ambitious nature of documenting the literally dozens of guitars used, Masterpiece Guitars becomes an engaging lesson in infinite possibilities, one that can be carried over to the instrument of your choice.

Visit Steve Howe and Martin Taylor on the web.