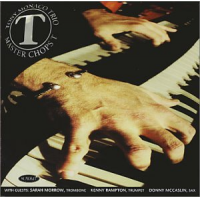 Tony Monaco's first recording, Burnin' Grooves (Summit 304, 2000) was very good. Half recorded with his own trio and half with his buddy's, Joey DeFrancesco, Grooves displays a prodigious and encyclopedic talent in the ways of the Hammond B-3. Earthy and Bluesy in one breath and sophisticated and erudite in the next, Monaco's playing can only be characterized as what happens the 1950's greasy sensibilities meets a twenty-first century funk and roll. As fine a recording as Burnin' Grooves might be; it was merely a warm up to Monaco's next recording, Master Chops T.

Master Chops T employs Monaco's regular trio augmented with tenorist Donny McCaslin, Trombonist Sarah Morrow, and trumpeter Kenny Rampton. The results are an expansion of Monaco's overall sound. All of the players concerned can turn the grease on and off, however the mood may strike them. "Acid Wash" is a nice roll in the hay, with McCaslin soloing in a well-behaved, almost prim fashion over Monaco's metastatic, funky groove. Monaco himself is demonic on the opener, taking a walk on the wild side with his B-3. Break forward one track and McCaslin, not known as a blues player, show his wares in that department. "White Dude Special" is a strolling blues where any lack of grease in the opener is made up for with a trap full. "Ya Bay BEE" is Jimmy Smith, Lee Morgan, and Tina Brooks circa 1955 shot into the year 2002. This is a splendid chitlin meal at the roadhouse, full of tasty rhythms and grooves. Mr. Monaco pulls out his first love, the accordion, for "Gramp's Blues." This instrument adds a soulful, ethnic quality to the blues. His trio provides just enough support to him. Guitarist Dereck Dicenzo plays the steel drums on sonny Rollins's "St. Thomas" that sounds so authentic, the listener will need a fruity drink with an umbrella in it.

On Burnin' Grooves, Monaco tried out his new reconstituted vocal cords (repairing damage from the Neuralgic Amyotrophy) on "Girl Talk." His voice was earnest, forthright, and perfectly tuned. On the present recording, Monaco sings two songs. The first is a "Luck Be A Lady" to make Sinatra proud, and a funky, jazzy "Me and Mrs. Jones." His control and confidence in high supply this outing. Monaco provides a surprise ending to the disc by covering The Average White Band's "Pick Up The Pieces." The sum of all parts, Master Chops T is superior to Burnin' Grooves, but do not think that one should do with out the earlier release. Very little music of this quality is being produced, particularly in the B-3 arena. Both recordings point the direction that organ trio jazz is going. Tony Monaco's name could be included with all modern B-3 players: DeFrancesco, Larry Goldings, and Jeff Palmer. Tony Monaco is Really here.