By GLENN ASTARITA
November 13, 2017
Sign in to view read count 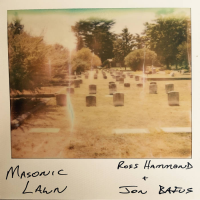 Guitarist Ross Hammond's radar blip keeps flickering across a multi-genre display the past several years, whether leading experimental jazz ensembles or morphing pre-conceived boundaries into other spheres. The Sacramento-based artist has performed with composer, reedman Vinnie Golia, drummer Mike Pride and a host of other cutting-edge progressive jazz heroes. On this release, Hammond unites his multifaceted musical persona with like-minded drummer Jon Bafus for a hip, roots-driven session that is a limited-CD release (only 50 copies) yet available as a digital-album.

The musicians' think outside the box, due to Bafus' polyrhythmic beats and Hammond's slight use of distortion techniques while using guitars that are indicative of Americana amid his resonant picking and climactic bottleneck licks. The duo paints a broad soundscape as the drummer's prominent kick-drum pulsations carry the bottom-end. Indeed, Hammond's fervent strumming; gliding, and sliding riffs are often devised with understated melodies. And while they spin old-time applications into a new thing, they maintain a sense of antiquity, accelerated by cyclical cadences and ascending choruses.

Pieces such as "Subterranean Doom Coffee" and "Blues for Juan Verde," are highlighted by circular passages and the guitarist's stinging resonator guitar movements, treated with Delta blues, classic country and steely voicings. However, the final track "Sloth and Stripe," features an open-ended forum, heightened by Hammond's somewhat ominous lap steel generated concoctions and deft interplay with Bafus as they pick up the pace by melding the activities into a straight-laced rocker. Hence, it's an unanticipated musical treat for 2017. And from a holistic perspective, Masonic Lawn is an album that should enjoy widespread appeal, given enough exposure via the digital airwaves and whatever else is needed to get the buzz on the street.

Like Being Kissed by God Herself; On the Incline; Masonic Lawn; Subterranean Doom Coffee; Blues for Juan Verde; Fish Girl; New Life in the Old Cherry Tree; Sloth and Stripe.