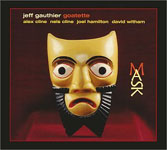 The "Goat" in violinist Jeff Gauthier's Goatette is the nickname he was tagged with as a child. His band Goatette, together since 1991, adds guitarist Nels Cline for this recording. Gauthier has been a regular collaborator with Nels and his drummer brother Alex Cline since the late-1970s in the ensemble Quartet Music, with deceased legendary bassist Eric von Essen. Gauthier produced Nels Cline's recent barn-burning Instrumentals (Cryptogramophone 2002). Gauthier has also been a regular contributor to projects by creative artists Vinny Golia and Gregg Bendian.

Mask is Gauthier's third release as a leader, and his best yet.

Gauthier and the Cline brothers are joined by bassist Joel Hamilton (Gregg Bendian Trio) and pianist David Witham, a Jaki Byard protege. Mask is an update on the melodic music of 1970s Pat Metheny, Bill Evans, and the explorations of Keith Jarrett. Goatette is benefited by the rare treat of Nels Cline's acoustic work on several tracks. Known for his ever-shredding guitar, Nels eschews the noise for these smart compositions.

The album kicks off with the 5/4 rhythmic "Clea's Bounce," a catchy connect-the-dots piece. Their "Waltz For K.P." is a nifty vehicle for subtle changes as Gauthier and Nels Cline exchange bebop licks. They remake Ornette Coleman's "Enfant" into a fusion (in the good sense) piece. There is a quietly beautiful moment here. Bassist Joel Hamilton plays the sweetest arco solo on "The Fools" and Alex Cline's composition "Forgiveness," is a simple poem of peace.

The record revolves around the nearly 18-minute title piece in four-movements. Written while Gauthier was in Guanajuato Mexico on Christmas Eve, his tequila-enhanced experience with the traditional masks of local residents yielded this fine composition. The spooky circumstance of Gauthier's evening with Billie Holiday singing Cole Porter is woven into his writing. The rocked-out beginning yields a creepy gong and percussion passage before Nels Cline tears through the closing. A very strong effort.