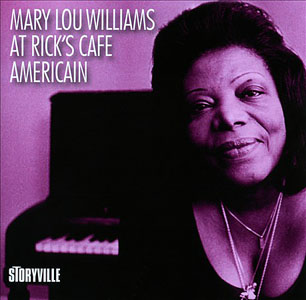 The second album of this double CD issue was released by Storyville in 1998, under the same title. Valuable enough in its way, featuring pianist Mary Lou Williams three years before her death, playing standards that include one of her own, "What's Your Story, Morning Glory?," originally composed for the Andy Kirk band in the days when she was the "baby at the baby grand." But the icing on the cake of this reissue is another disc, that features six solo numbers and an additional eight trio tracks, all from the same gig.

Williams' playing is incredibly robust, bearing in mind that, shortly before this set on November 14 1979 at Rick's Café Americain, in Chicago, she had been diagnosed with terminal cancer. But she never was one to let things get her down. Just before her death, looking back on her long career, she said, "I did it, didn't I? Through muck and mud."

She surely did, writing and arranging hundreds of songs in the swing era for Kirk, Duke Ellington and Benny Goodman, then going on to become friend and mentor to the men who more or less single-handedly created bebop, Charlie Parker, Dizzy Gillespie and Thelonious Monk.

Williams was woefully under-recorded later in life, and Storyville has done the jazz world a great service in bringing to light these 14 tracks from Rick's, which were left out first time around—the six solos, most of all.

The first of these, "Spirituals 2 & 3" reflects Williams' interest in religious music, which culminated in her 1960s composition, "Black Christ of the Andes," in honor of Peruvian monk St. Martin de Porres, patron saint of inter-racial harmony.

After the stunningly fast Spanish-tinged "Fandangle," Williams returns to her roots with "Old Fashioned Slow Blues." The happy-go-lucky "Night Life" acts as a prelude to the out-and-out boogie-woogie of "Baby Bear Boogie/Roll 'Em," harking back to her time with the Kirk band in Kansas City where Pete Johnson was king of the keyboard.

There are two versions of Billy Taylor's "A Grand Night For Swinging," which Williams made her own, some nice takes on various pieces of Ellingtonia, and a wonderfully intricate version of "Autumn Leaves," featuring a long bass solo by Milton Scruggs. The entire session is chockfull of technical twists and turns, imbued with Williams' indomitable sense of humor. Who could ask for anything more?