By C. MICHAEL BAILEY
June 14, 2015
Sign in to view read count
The British audiophile record label Linn has a sub-imprint called Echo. This imprint is dedicated to the re-release of older label titles. It is from this considerable loam of music that these two Martin Taylor releases are gleaned, both hosting appearances by violinist Stephane Grappelli from the mid-1990s. 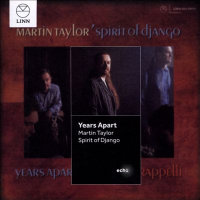 The Spirit of Django was guitarist Martin Taylor's Django Reinhardt / Hot Club revival band. Taylor's studied guitar playing certainly infuses the spirit of Django. Judging from the set opener "Sweet Sue Just You," the performances are going to be vintage Hot Club, guitar and accordion (Jack Emblow) abound. But Taylor refines his and his band's approach on pieces like is originals "Going Home Again" and "Years Apart," the later featuring vocalist Claire Martin. But for the most part, he remains in the vernacular.

"Undecided" features equally Taylor, vocalist Martin and violinist Stephane Grappelli on the Reinhardt/Grappelli composition, "Undecided," the most fully realized Hot Club offering on the disc. "Musette for a Magpie" is an excellent Taylor study featuring saxophonist Dave O'Higgins playing as vibrato-less a reed sound as can be imagined. Emblow's deft accordion playing gives the piece its waltz-polka flavor. "I Can't Give You Anything But Love" is straight out of the Quintette du Hot Club de France book. This is Gypsy Swing at its best. It takes a recording like this to demonstrate the difference between wannabe Hot Club bands and the real thing. Jazz is Jazz, but this has that smoky, deep roasted flavor.

Reunion is a considerably more intimate affair than Years Apart. It is an all-to-brief duet recital with Taylor and Grappelli strolling through the 1930s swing era as imagined in prewar France. At 85, Grappelli shows no diminishment from age. He leads and solos with bold confidence and a careful touch. "Jive at Five" proves positive the adage that one best start a show with an upbeat number. The following "Willow Weep for Me" is steeped in the blues before being drawn through Grappelli's European prism into an almost impressionistic tone poem.

Taylor's guitar playing conforms to the more intimate atmosphere, playing equal and in homage to Grappelli. It is obvious there is a rapport between the two artists that gels fully when the pair are playing the ballads. This is that special brand of jazz that celebrates the brashness of American jazz with the European sophistication of Grappelli's fine fiddle. It bears a nostalgic sound that never gets old.