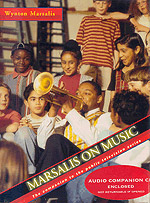 Marsalis on Music, trumpeter Wynton Marsalis' groundbreaking audio/visual music education project from 1995, was produced by Sony Classical Film & Video, debuted in the US on PBS, and subsequently translated and shown around the world. The Peabody Award-winning program provides an excellent introduction to classical and jazz music, all in a fun and identifiable way. The video version is available in libraries, schools and rental clubs everywhere.

While aimed primarily at young people and families, there is plenty here to interest the adults too. Marsalis on Music showcases Wynton's trademark down-to-earth object lessons. His analogies to sports and other school activities keep kids engaged, while other fresh analogies may prove revelatory even to jazz aficionados. If nothing else, it gives music fans another well-produced portal into Wynton's unique jazz conception.

The book is organized into four chapters, one for each of the PBS programs. They focus on the rhythmic core of all music, an overview of musical forms, links between classic wind bands and jazz, and Wynton's own practice methods. Colorful inserts provide insights into a musical score, "theme and variation along the lines of a Pablo Picasso painting, and a dummy-proof "blues ruler. Wynton wrote in-depth profiles of each composer whose work he samples: Peter Ilyich Tchaikovsky, Duke Ellington, Sergei Prokofiev, George Gershwin, Charles Ives, John Phillip Sousa, Scott Joplin and Louis Armstrong. The book ends with a useful glossary of music, tempo and performance terms.

Reading a book has always been a difficult way to learn music, but it remains a sort of necessary evil. Wynton easily overcomes that handicap with a special audio CD. Readers can listen along to lessons performed by truly world-class musicians. In addition to Wynton's own celebrated septet, soloists include classical superstars Seiji Ozawa and Yo-Yo Ma, the Liberty Brass Band and the Tanglewood Music Center Orchestra. You may want to check out Marsalis on Music just for the CD—it's that good.

Wynton Marsalis, winner of Grammy awards in both jazz and classical disciplines, is better suited than almost anyone to create such a work. He is, after all, the most famous jazz musician of his generation, and this uniquely American art form's de facto spokesperson. He uses his position and many impressive connections for the greater good in Marsalis on Music. The book itself swings, thanks to photographer Frank Stewart, illustrators Romare Bearden and Stuart Davis, art director Debra Morton Hoyt and layout artist Beth Tondreau.

Wynton belongs to the first family of New Orleans jazz. His father, Ellis Marsalis, is a legendary pianist and educator; he even named his son after his friend and fellow jazz pianist Wynton Kelly. The Marsalis siblings have earned recognition for their prowess as well. Wynton is a co-founder and the Artistic Director of Jazz at the Lincoln Center in New York City. Not long after the broadcast of Marsalis on Music, his Blood on the Fields became the first jazz composition to receive the Pulitzer Prize for Music.

Marsalis on Music is highly recommended for all music fans. It stands as further proof that Wynton Marsalis is one of the great advocates of the arts, particularly in the area of jazz education for youth of every generation.

Other recommended books by Wynton Marsalis: