By CELESTE SUNDERLAND
June 13, 2007
Sign in to view read count 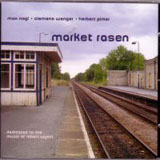 The fanfare of "Fatty, the opening track of Market Rasen, sets an electric tone that plays out in unexpected ways. A wild rebellion composed of Max Nagl's alto saxophone, Clemens Wenger's synthesizer, Herbert Pirker's drums and Bradley Jones' bass kicks the disc off strong and direct, not at all preparing the listener for what's to come. Dedicated to the music of Robert Wyatt, the disc includes six of the British drummer, vocalist and founding member of Soft Machine's compositions, combined with five of Nagl's own pieces.

For the most part, after that brisk introduction, the group abandons its recklessness and eases into a thoughtful prism of sound for a proper tribute to the man whose music has both analyzed social constructs and pushed psychedelic fusion through myriad genres. From here on out, the album blisters with a keen energy, exploring diverse auditory options and ties sounds up together in brash, peculiar formations.

Pirker has a way of banging out a few beats on drums, creating an energy that continues to resonate after the volume has ebbed, a technique that lends a strong original signature to the album. The product is aided by industrial, space-rock samples that mingle with the acoustic instruments, notably Nagl's clarinet on "Alliance, a slowed down version of the moody number off Wyatt's 1985 Rykodisc release Old Rottenhat. "A Saturday In New York opens with the poignant, hollow thump played by Wenger on synthesizer that mimics a hesitant marimba, or regretful kalimba. Shouts of "Out of Iraq! and "End the war! burst through among a marching drum corps as the piece eases into a field recording of an anti-war rally.

The trippy sound collages expected from an album honoring Wyatt are there. "5 Black Notes And 1 White Note begins with an orchestral swell, slurred by a stuttering, synthetic warp and pierced by Nagl's warbling horn that fades in and out. The prog-rock fusion is also present, with "Box 25/4 Lid from Soft Machine's 1968 self-titled debut disc. Nagl, Wenger, Pirker and Jones infuse it with their own progressive gait.