By DAN BILAWSKY
September 23, 2014
Sign in to view read count 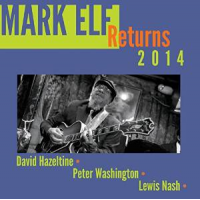 Nothing can stop guitarist Mark Elf from making music. He's battled serious health problems, contended with the ups and downs of the music industry for decades, and, most recently, dealt with the aftermath of Hurricane Sandy, the massive storm that flooded his home, delaying the recording of this record for a year. In spite of all of those setbacks and hardships, Elf still manages to have a fairly sunny musical outlook when he straps on the guitar for this, his first album in eight years.

Mark Elf Returns 2014 finds the guitarist swinging alongside an A-list rhythm section made up of pianist David Hazeltine, bassist Peter Washington, and drummer Lewis Nash. All three men were aboard for Elf's two previous projects—Glad To Be Back (Jen Bay Records, 2004) and Liftoff (Jen Bay Records, 2006)—so there's instant rapport, something that's really required when recording without rehearsal, as was done here.

The music presented on this one is direct and accessible, as Elf delivers swingers, a couple of ballads, a spicy mambo, and plenty of songs that basically follow the tried-and-true head-solos-head format. And though the song form(s) may be predictable at times, song forms are merely vessels meant to contain the music. It's what the musicians put into those songs that counts, and these men only add the finest musical ideas and ingredients to these successful sonic recipes.

The album opens on "A Little Ditty," a swinging number that's based on the changes of "Jordu," and quickly moves to ballad country with "It Was So Beautiful." After that, there's more modest swing, a one-off guest shot from percussionist Steven Kroon on "Michellie's Mambo," a pair of burning numbers that feature Elf on baritone guitar, and a mellow goodbye in the form of "The Sandy Effect." There's lots to love here solo-wise, with plenty of fine work from Elf and Hazeltine, lots of trading fours with Nash, and an eye-of-the-storm solo from Washington during "Low Blow."

This is straight-ahead jazz as it should be played. Here's to hoping that life doesn't delay the next one from Elf.

A Little Ditty; It Was So Beautiful; Jacky's Jaunt; Time On My Hands; Michellie's Mambo; Low Blow; Titillating; The Bottom Line; People Will Say We're In Love; The Sandy Effect.