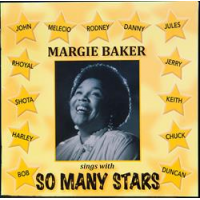 Margie Baker didn't begin her career as a jazz and blues vocalist in the San Francisco area until she was nearly 40, but she made up for this delayed entry with endurance: She was often featured at the Monterey Jazz Festival and as in Festival road shows led by Richie Cole and the legendary James Moody (for whom Baker penned "Mood for Mr. Moody"). Baker also became one of Dizzy Gillespie's favorite vocalists and sat in with his band whenever she could—"He was my mentor until the day he died," she once recalled.

This two-CD retrospective celebrates not only Baker (now on the other side of 80) but also her devotion to the San Francisco Bay area that she served as a public school district educator and administrator for 48 years. She's joined in this celebration by So Many Stars from "Margie's musical galaxy," as she calls them, such as guitarist Rodney Jones, bassist/trombonist Chuck Bennett and percussionist John Santos, one of Baker's sixth grade students! "This is a tribute to them," Baker explains. "These are not egocentric, big-time musicians, but they're wonderful musicians. We work so much and so well together." (You can still occasionally hear Baker sing during Sunday brunch at the Hyatt Regency Hotel near San Francisco International Airport.)

With So Many Stars, Baker embodies a uniquely personal, warm and living history of popular, jazz and blues. Walking bass and rocking piano bounce her voice like a rubber ball through "Every Day I Have the Blues," and she swaggers through "Gee Baby (Ain't I Good to You?)" atop electric piano, like Etta James on an exceptionally sassy day. Disc one closes with Baker, bassist Bennett and pianist Keith Williams amplifying the Latin funk and jazz in Horace Silver's classic "Señor Blues."

But Baker's voice dances in shadows, too. The darkness of Thelonious Monk's meditation "'Round Midnight" illuminates all the weariness in a voice that's perfect for pulling out ache and wonder. Her rendition of "Go Away Little Boy" is the polar opposite of Donny Osmond's 1971 chart-topper in every imaginable way—resigned and worn, as Baker simply flattens out and elongates higher notes that her voice might not be able to otherwise reach.

Baker dedicates this version of "Mood for Mister Moody" to Moody's wife and daughter. When she sings, "I wanna move/ I wanna groove/ Come on and blow," the band—especially saxophonist Jules Broussard—sure takes up her invitation.

Baker's voice doesn't always find the right note right away. But it always finds, as "In a Mellow Tone," the softest pocket of a song's rhythm. If you're focused on pristine, pitch-perfect readings, Margie Baker Sings With So Many Stars is not for you. But if you want to listen to music that spills over with jazz and blues emotion, and genuinely feel the empathy between a singer and her supporting ensemble, it's a great set.

Disc One: Deed I Do; 'Round Midnight; Mais Que Nada; So Many Stars; Gee Baby; In a Mellow Tone; Go Away Little Boy; Every Day I Have the Blues; You've Changed; Señor Blues. Disc Two: Lazy Afternoon; Mood for Mr. Moody; Invitation; Lucky So and So; Can't Take My Eyes Off of You; Chains of Love; I Want a Little Boy; Nightingale; There Will Never Be Another You; Come Sunday.