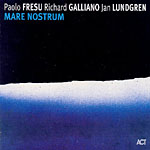 Italy's Paolo Fresu (trumpet), Frenchman Richard Galliano (accordion) and Swedish pianist Jan Lundgren get together to form what may well be the first Eurojazz supergroup. All have established their credentials playing with big names: Fresu with Carla Bley, Gerry Mulligan, David Liebman, Dave Holland, John Abercrombie, Jim Hall and Toots Thielemans; Galliano with George Mraz, Al Foster, Ron Carter, Chet Baker and Jan Garbarek, in addition to being a member of Claude Nougaro's band for several years; and Lundgren with Johnny Griffin, Benny Golson, Herb Geller, James Moody and singer Stacey Kent. It's a curious line-up, instrumentally, but one that works amazingly well most of the time.

The ethereal title track, composed by a Lundgren, sets the tone for the session. It means "Our Sea," most likely a reference to the Baltic. The pianist lives by its shores in the southern Swedish town of Ystad. The Latin cleverly evokes his previous album Magnum Mysterium, though this one is secular and more diffuse. It includes works by Brazilian composer Antonio Carlos "Tom" Jobim, the chap who wrote "Desafinado", and Maurice Ravel... now what his big hit?

Lundgren and Galliano each contribute four originals, Fresu two. The Italian's first is titled "Mio Mehmet, forse il destino m'impedira di rivederti." It's after a poem by the revolutionary Turkish poet Nazim Hikmet, whose work I'm sure you're all familiar with. The second, "Sonia's Nightmare" is one of the stand-out tracks, eerily, hauntingly edgy. Only to be expected, you might think, of a man described in the accompanying booklet as "an untameable poet of sound."

Pretentious, moi? Let's be generous and say rather that this is a serious album by serious men. Though Galliano's accordion is always there to lighten things up by evoking Paris when it was gay in the old sense of the word. There's even a version of French variety artist Charles Trenet's "Que reste-t-il de nos amours?" And Galliano's bossa nova tribute, "Para Jobim" is fittingly light and breezy with some very nice trumpet from Fresu and good ensemble interplay between the composer and Lundgren.

With no bass or drums, it's scarcely "music to pat your foot to," as Count Basie once defined jazz. But the borders of the European variant of the music came down long ago, like the Continent's customs and passport checks. A fact of which we are reminded by the final track. Lundgren and Fresu play the lovely, lilting, melancholic Swedish folksong "Varvindar Friska." It recalls pianist Jan Johansson's 1960s Scandinavian hit Jazz Pa Svenska, featuring interpretations of Swedish folk songs. A precursor to all the experimentation with different song forms that has followed on the shores of Mare Nostrum and elsewhere in the old world.