The current stream of tenor saxophonists is often lamented by older generations of musicians and fans alike as decidedly postmodern: producing artifice over art. And while this has been a frequent, and often unfounded critique of the old guard's throughout the history of the music, it perhaps has new resonance today. Technique has reached ever-dazzling heights in the advent of the super-musician. As such, it is not surprising that Chris Potter's meandering—albeit deft—improvisations can leave the listener exhausted. No less irritating to the traditionalists is the academic self-consciousness that drove Joshua Redman to record Beethoven's "Moonlight Sonata" on his 2009 release, Compass. This is not to say that Potter and Redman are not great tenors, they are, but rather that jazz is sometimes the hostage of ego. As Clark Terry once asserted, "Two hips make an ass." 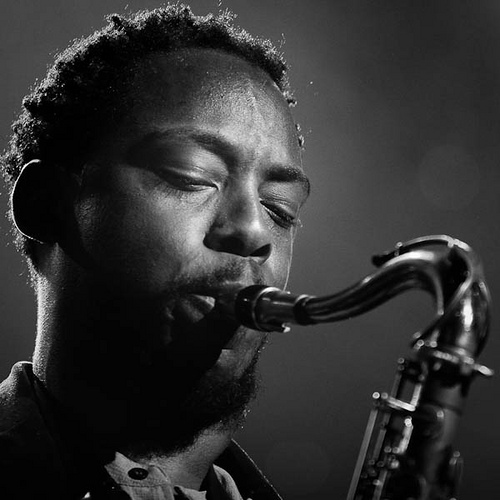 Washington, D.C.'s historic Bohemian Caverns, opened in 1926, calls itself "The Sole Home of Soul Jazz." And why should it not? From Duke Ellington to John Coltrane to Aretha Franklin, most every jazz great has performed at the corner of 11th and U. However, despite The Caverns' status as one of the nation's great venues, it is not as intellectually daunting as, say, New York's Village Vanguard. As the motto suggests, the program here is unadulterated American roots music. And though the "Grits and Gravy" may not always be outwardly present, their feeling is. Accordingly, who better to take the stage than Marcus Strickland, the rising tenor who is rarely guilty of the pretense that so galls the purists?

Strickland, 31, is a rare talent for his ability to negotiate the language of history with the vocabulary of today. His playing is never pedantic, but always logical; never lurid, but always exciting. Having already released six albums as a leader, the Florida native is certainly a leading voice on his instrument. This night, he was flanked by Austrian bassist Hans Glawischnig and his brother, E.J. Strickland on drums. Together the three formed a sturdy ensemble, braving all the risks of the saxophone trio.

Before beginning the set, Strickland took the microphone to introduce the band: "I'd like to thank my lady's sister-in-law, Kendra McGee, for a wonderful home-cooked meal," he said. "I had never had mac 'n' cheese with sugar in it before. Hopefully it will help us to play better for you." He was gracious in welcoming the audience before charging into the first piece, a composition by Björk called "Scatterheart," for which he played soprano saxophone. Instantly, the soprano soared into the altissimo register to state the familiar melody as a modern, brutal backbeat bellowed from the drums. The saxophone, at once expansive and piercing, recalled the exoticism of Wayne Shorter when on the same instrument. The resultant music was sufficiently up-to-date, but equally authentic, refusing many of the contrivances of new post-bop.

Strickland played the rest of the set exclusively on tenor saxophone, forging through two originals, "Set Free," which quickly inspired comparisons to Ornette Coleman, and the mordant "Mudbone," written for comedian Richard Pryor. For his ballad, Strickland chose "Body and Soul." In his sound, the audience could hear echoes of Sonny Rollins and Joe Henderson so faint that they could only be the product of the most loyal study. And as he ambled through the ballad with great confidence, his tone became more and more wooly, perhaps an affectionate nod to the many giants who have played it before him. Glawischnig, who had been superb all night, took a convincing half-chorus before the out-head.

To conclude, Strickland announced he would play a tune he composed for one of his mentors, Jeff "Tain" Watts, called "Cuspy's Delight" as the latter's birthday falls on the cusp of Capricorn and Aquarius. The melody, like the accompaniment beneath it, was austere and skeletal. And as the scorching closer finished, the audience—thoroughly satisfied—erupted in applause. The group had whittled down the music to its most irreducible elements, using space to amplify rhythm and melody. Despite the fears of many, jazz is perhaps destined to become neither math-music nor performance art.