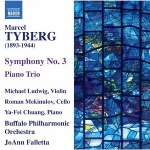 Often, the story behind the music makes it that much more compelling. Marcel Tyberg was an Austrian composer of certain repute, his Symphony No. 2 being premiered by friend Rafael Kubelik in the early 1930s. But not much else was heard from this composer. Tyberg was a Jew, in danger of Gestapo deportment in 1943, who entrusted his music manuscripts to his close friend, Italian physician Milan Mihich. Tyberg is thought to have perished in Auschwitz within sight of the war's end.

Mihich transferred the manuscripts to his son, oncologist Enrico, who, in turn, shared them with maestro JoAnn Falletta, who is currently performing the never-before-heard music with her Buffalo Philharmonic Orchestra. For every Marcel Tyberg, there were a dozen more unknown Jewish artists who died unheralded. Tyberg's music is compelling for this story alone, but it is much more than that. It represents a lost testament, now found and profound.

His Symphony No. 3 was composed in 1943 and shows a symphonist in full bloom. The four movement, sonata-style composition is amazingly bright, sunny and hopeful to have been composed during the nadir of World War II. Tyberg shares a fondness for low brass with both Wagner and Bruckner, avoiding the often sluggish momentum of those two. His strings writing reflects more Brahms (and through Brahms, Beethoven) than Mahler or Richard Strauss. The "adagio" is stunning in its harmonic conception and tuneful in its approach. The finale sounds almost American in the sense that Aaron Copland captured the American spirit musically.

Where Bruckner composed cathedrals and Mahler, anger-therapy sessions, Tyberg wrote sunshine in its most organic form. Falletta and the Buffalo band perform just as crisply, the brass is shiny and the strings sharp, with sonics captured by the Naxos engineers. Falletta's pacing is spot on, capturing this most important music...that was never heard before, composed by a saddened spirit going home.