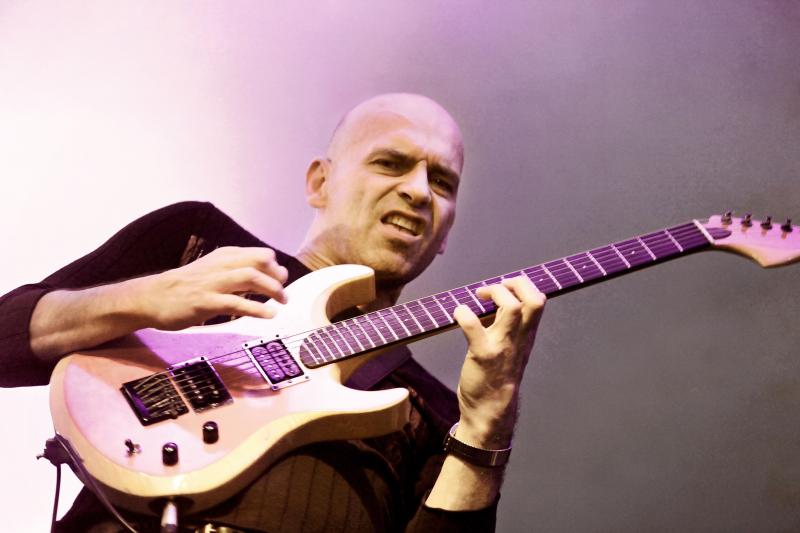 A solo performance is by definition an intense experience, and when the musician is committed to a style which is itself close to impenetrable the result can be bewildering; in this case a performance is bound only by the resourcefulness of the audience.

Those attending this penultimate concert of French guitarist Marc Ducret's Finnish tour almost certainly knew what to expect. With the assistance of the French Institute, Ducret had toured three times before, playing Finland's largest musical event (Pori Jazz Festival) with his trio in 2010. But he had never before appeared on stage alone and never suggested that he could or would play acoustically. Ducret's career included a time in the late 1970s when he was recognized for his classical repertoire, but with over 20 years performing his own compositions he is now defined as a guitarist with a harsh but singularly un-manipulated electric timbre and a technique that is both robust and rampaging while being clean and often delicate.

Playing in Big Satan with saxophonist Tim Berne and drummer Tom Rainey, Ducret has earned a reputation for intensity and virtuosity. In solo performance this was very obvious, but the context of the music was less apparent. Ducret credits the twentieth century author Vladimir Nabokov with the spark for the work played in Malmintalo—a paragraph written in a late novel, Ada, which impressed him with the multidimensionality of the communicated messages. In fact it provided the inspiration for an extended opus named Tower, which Ducret has written around various ensembles with whom he currently plays, including Berne's trio. At least two of the pieces were from this series, "Real Thing, part 1" and "Real Thing, part 3."

At the end of one solo piece, Ducret admitted mixing together one of these pieces with another composition, "Electricity." This apparent mix-up had surely gone unnoticed by the audience, whose deepest concentration could hardly distinguish the lines of structure or similarity with much clarity. But while this deviation didn't detract from the experience, it revealed that a musician of supreme virtuosity and dexterity can be appreciated on whatever level the audience chooses. An 11 year-old neighbor certainly had similar difficulty in maintaining the depth of focus for the full 65 minutes, but was frequently and similarly dazzled by Ducret's musicianship, excited by his extraordinary range of sound, baffled by his composition and intrigued by his intent.