The two most recent of this new triptych Some Love Songs (2005) and Some More Love Songs (2012) for the German Pirouet label are a mixture of standard ballads and Copland originals. Add to these, the earlier released Haunted Heart (2010, originally released in 2001 as Haunted Heart and Other Ballads) on Hatology and we have a nice ballad collection by one of the generation of pianists successfully moving beyond the Bill Evans influence in jazz.

Haunted Heart was the beginning of a selective distillation of what pianist Brad Mehldau did with his Art of the TrioArt of the Trio series of the the late 1990s. This was Copland's first full-scale ballads exploration, a program as loosely conceived as trumpeter Miles Davis' Kind of Blue (Columbia, 1959), coming to gel within the pianist's vision and creative criticality. The empathy between Copland, bassist Drew Gress and drummer Jochen Ruchert is seamless and more completely realized than that heard in the great Bill Evans-Scott LaFaro-Paul Motian performances. John Kelman, in his earlier reviewof Haunted Heart upon its 2010 re-release, echoed the liner notes, observing that pianist Marc Copland uses three disparate and darkly stark performances of Rodgers and Hammerstein's "My Favorite Things" as the performance theme dividing two "minisets" of standard and original ballads that nominally orbit the planet John Coltrane.

Keeping with the "two miniset" motif, the whole of this disc could serve as a soundtrack of some post-apocalyptic noir story set in a dive bar buried in some nameless metropolis. The music is dark and air-conditioned cooled, smelling of unfiltered cigarettes and empty beer mugs. The opening theme of "My Favorite Things" is taken solo by Copland, who plays the piece delicately with well-placed Thelonious Monk dissonance. This performance is dark and skeletal in detail. The first miniset provides a stark treatment of Coltrane's "Crescent," a composition already scaled down by the composer from his more recent "sheets of sound." Copland turns the Coltrane-quasi-ballad into a full gale one, leading into Copland's own ethereal "Dark Territory." "Greensleeves," another Coltrane staple, is presented barely tethered to tempo and time. It is a Schumann miniture bent back on itself. The miniset closes with Sting's "When We Dance" from his 1994 recording of the same name. It gives the set and disc a contemporary character while maintaining the muted character of the whole.

The second "My Favorite Things" is slightly longer than the first and is more darkly dissonant. It is a further unravelling of the familiar melody into an anxious thought. Mal Waldron's sublime "Soul Eyes" is treated gently by Copland, who plumbs its depth for quiet inspiration. The Gershwin's "It Ain't Necessarily So" joins Cole Porter's "Easy to Love" and the title piece in a whole-scale re-realization. "It Ain't Necessarily So" almost sounds like "Angel Eyes" while the upbeat "Easy to Love" and "Haunted Heart" push further beyond the impressionism of Evans and like pianists. The closing theme "My Favorite Things" is the most dissonant and angry of performances. Copland deconstructs the cheerful holiday melody, reassembling it as a troubled and troubling tune.

Copland and company do not miss a beat, picking up four years after Haunted Heart with the similarly styled Some Love Songs. Again, the pianist mingles original ballad compositions with tried and true standards presented with somewhat darker hues than most ballad interpretations. Copland favors a nervous undercurrent in his performance, usually manifest in his anxious right hand. After a romantic reading of Joni Mitchell's "Rainy Night House" from her Ladies of the Canyon (Reprise, 1970), Copland gets his abstract freak on in the Copland his original "Round She Goes," where the Copland establishes a a tense figure over which he and bassist Gress play an angular melody that gives way to on of Gress' most fully realized solos. Copland then solos, dovetailing out of Gress' complex figures into some of his own. Ruchert establishes some quiet poly-rhythms that help move the song along. Copland and Gress laydown a repeating figure over which Ruchert solos. The arrangement is most effective. Richard Rodger's "Glad to be Unhappy" is given length consideration and uses the same Copland-Gress double-team on Ruchert's solo.

The "Spartacus Love Theme" is carefully developed in such a manner that it is more introspective than Bill Evans' performances (if that is possible). Copland rigorously adheres to the song form while stretching and condensing time in the song. He does likewise with Wayne Shorter's classic "Footprints," where all three musicians sound as if they have abandoned one another in search of Shorter's illusive melody. Postmodern and completely up-to-date contemporary. The disc closes with Victor Young's "My Foolish Heart" given sumptuous treatment by the trio. The song's skeleton is laid bare and the underlying currents of melody and harmony fully exposed. Gress provides the swing push to the song, which is maintained by Ruchert. Copland, for his part, weaves magic out of thin air. 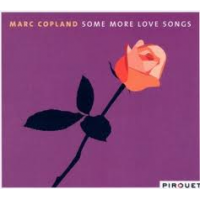 Like Some Love Songs, its sequel Some More Love Songs presents seven selections beginning with a Joni Mitchell composition and closing with a classic one by Victor Young. The disc opens with a lengthy and spartan version of "I Don't Know Where I Stand" from Mitchell's 1969 recording, Clouds (Reprise). Young's "When I Fall in Love" perfectly mimics "My Foolish Heart" on the previous recording. In between are the old and new presented slightly brighter than the two previous recordings, but still the overall tone is crepuscular.

While a moratorium is possibly in order for performances of "My Funny Valentine," Copland makes a compelling case for further mistreatment of this jazz warhorse. While familiarity breeds contempt, familiarity is the touchstone of standards performance. It is useful to know what the song originally sounded like to appreciate what masters of the stripe of Copland. Gress sets up a medium-fast tempo with Ruchert, providing the pianist a disquieting environment to present the delicate melody not so delicately. This is the essence of modern standards interpretation.

These three recordings are of a ruminative music, quietly presented and thoughtfully conceived. The darkness of the performances is not so much intended as a foreboding as it is concentration: a testing of the boundaries of harmony and consonance. Copland, and his label made Bill Carrothers, are among the most underrated jazz pianists, who are proving that the jazz piano did not end with Bill Evans.

Tracks: Rainy Night House; Round She Goes; Time Was; Glad to Be Unhappy; Spartacus Love Theme; Footprints; My Foolish Heart.

Tracks: I Don't Know Where I Stand; My Funny Valentine; Eighty One; Rainbow's End; I've Got You under My Skin; I Remember You; When I Fall in Love.