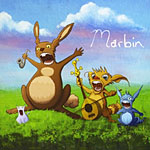 Categorizing Marbin's eponymous release as ambient jazz hugely underestimates its music. It is rather atmospheric, but also has enough improvisational substance to not just stay in the background.

Marbin is the duo of guitarist Dani Rabin and saxophonist Danny Markovitz. The two also composed all the pieces on the record, ranging from the vaguely bluesy "Abadaba" and theatrical "Mei" (with added vocalese from Matthew Davidson), to the Japanese-sounding "Crystal Bells" and gorgeous tango, "Cuba." The CD is laid out like a five-course meal for the ears; with each long track (the last one being the prog rock-sounding "Rust") followed by a short one, serving as a palate cleanser between courses.

Throughout the various styles, the unifying factor remains the intensely emotional and constantly mellifluous playing of the pair, which maintains the theme despite its complex, angular and unpredictable flights of improvisational fancy, both with individual solos and while each member plays off each other. Their sounds weave around each other, diverge, and then flow back into the theme of each composition.

It is easy to compare Marbin to the musical partnership of Jan Garbarek and Ralph Towner with the ECM-esque sound of their work, and with careful uses of silent pauses to accentuate the notes, but Markovitz's sound is far more urgent than Garbarek's and with more bite, and Rabin's guitar work, although as lush as Towner's, has a kick reminiscent of Jimi Hendrix . Still, it is important to point out that both on their solos and on the multilayered group playing each has his own unique voice, a rare find on a debut album.

Both Rabin and Markovitz are master improvisers and superlative instrumentalists who have a deep compatibility with one another, both as composers and interpreters. The impeccably recorded Marbin, with its animé-inspired mini-LP cover, is only a little over half an hour long, but is a densely layered work of highly rewarding and enjoy able music that bends genres without ever losing its thematic unity.