Many Shades of Jazz Come Out at Newport 2010

The variety of music at the 2010 CareFusion Newport Jazz Festival August 6-9 was one of its notable traits. Mainstream, Latin, electric stuff, ornate orchestral offerings, swing and all kinds of things in between.

The originality of the music in so many of the bands—David Binney, Dave Douglas, Fly (Mark Turner, Jeff Ballard, Larry Grenadier), Rez Abbasi, JD Allen, Ben Allison, Jason Moran, Ken Vandermark, and Sun Ra Arkestra alumnus Marshall Allen (with Matthew Shipp and Joe Morris) was impressive. It was also a fine example of the health of the music and the many facets of its creators that are out there ion the scene now. That's not taking into account jazz stalwarts like Chick Corea, Herbie Hancock, Ahmad Jamal, Jon Faddis, Wynton Marsalis and various flavors of big band/orchestral jazz. 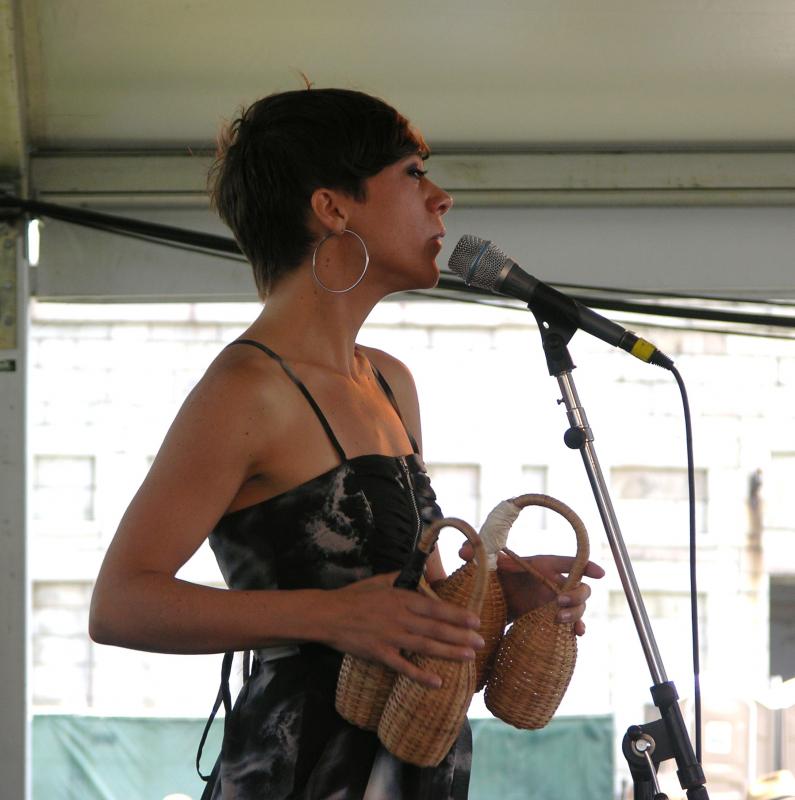 There weren't many vocalists on the docket, but Gretchen Parlato was a delight, playing on one of the three stages with a superb trio consisting of Gerald Clayton on piano, Kendrick Scott on drums and Alan Hampton on bass, she exhibited her unique approach to the art form. She doesn't have the big voice, octave-spanning instrument of some jazz singers. What she has she uses to great advantage, her artistic statement as valid as any. Her breathy, intimate style is subdued, but expressive. She finds the right place to drop a phrase, elongating a note, cooing with sensuality. Parlato captures you by pulling gently on your sleeve and purring in your ear, not grabbing your attention with grand gesture.

Sometimes there were wordless vocal improvisations, like on "Within Me." Not scat, but soaring like a guitar through the gently rhythm of the song. Sweetly done. "Doralice" was an exquisite duet with Scott, who provided varied rhythms, tasteful and exotic. He's one of the most musical of drummers. And Parlato's dressing of the Jobim lyric over that cushion of sound was special. So was her duet with Clayton on Monk's "Ugly Beauty." Delicate but delicious. The closer of the Michal Jackson hit "I Can't help It" was slightly funky and alluring. This is a special singer.

Ben Allison's music was excellent, melodies that allowed soloists like Jenny Scheinman, Shane Endsley and Steve Cardenas to shine. Rudy Royston was excellent on drums, providing the driving force—with Allison's bass—to each varied composition, whether aggressive, as it sometimes got, or more serene. Allison is a fine writer as well as player. 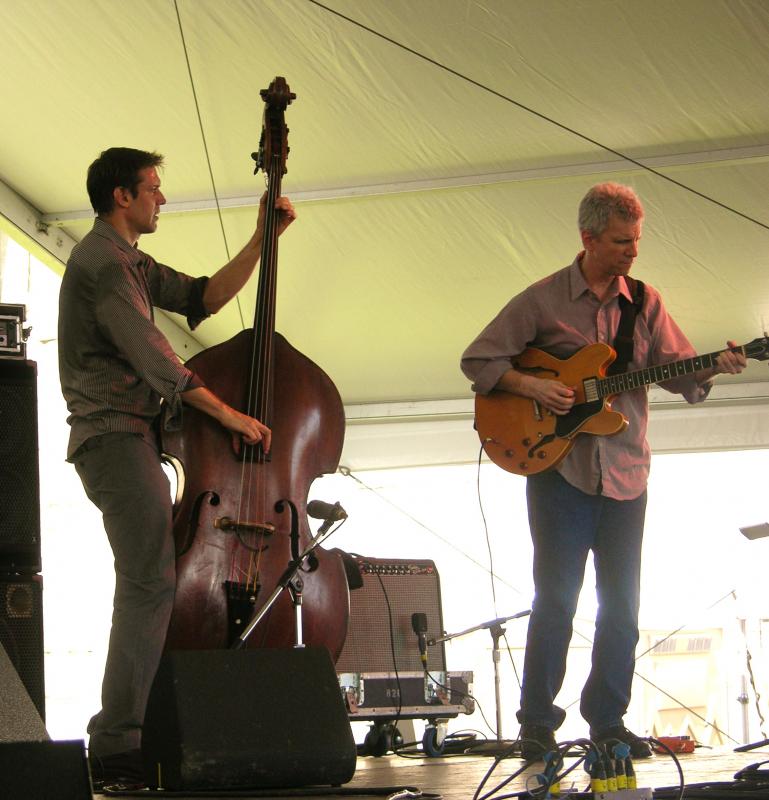 Anat Cohen's quartet was more mainstream, but her clarinet is anything but staid. This woman wails, and her imagination and fleet fingers always provide thrills and surprises along the way. A first-rate performer and musician. David Binney's Third Occasion Quartet was a pleasant surprise. With the great drummer Brian Blade drawing from his varied, unanticipated, colorful rhythmic bag, and pianist Craig Taborn's creative improvisational mind, Binney laid out emotionally charged and cerebral saxophone. The band was tight and the original music intriguing and arresting.

The same with the Fly trio. turner's tenor sax sounded fine over Ballard's shifting rhythms and Grenadier's steady, flowing bass. The improvisations were loose at times, though connected. Their improvisational paths were fun to follow. Top musicians developing a cohesive mind and good sound.

Ken Vandermark's Powerhouse Sound band came on as advertised. They sounded bigger than a quartet at times, and the music delved into many areas. Including funk and rock. One number started funky as hell, with Vandermark's sax getting into that genre, slick and slurpy. As the tune got more intense and the sax laid out, guitarist Jeff Parker took off, wailing over a driving rhythm that was reminiscent of Hendrix with Buddy Miles. The saxophonist's music stretched boundaries, but improvisation was inside of everything.

Pianist Jason Moran showed his personal and exiting improvisational mind that has been capturing acclaim. The trio, powered by the fluid, polyrhythmic drumming of Nasheet Waits (who also provided the panoramic rhythms for Dave Douglas' Brass Ecstasy earlier in the afternoon), wandered many paths. The angular interpretation of "Crepuscule With Nellie" was particularly enjoyable. Drummer Matt Wilson's avant-garde-leading quartet was augmented by a string quartet and occasional vocals. The music was free form sounding at times, ethnic sounding at times, also melodic and romantic, and a resembled a jumbled modern painting at times—in a good way. Wilson's influences are varied and he has no allegiance to sticking to standard styles. He follows his own muse, not matter how "different" it might be. Expect the unexpected. It's an interesting ride.

More in the pocket, but no less pleasing, was Trio Da Paz, with Harry Allen on tenor sax. They played soft, sexy jazz samba tunes like "Wave" and "One Note Samba." The trio, led by Duduka Da Fonseca and featuring the gorgeous acoustic guitar of Romero Lubambo, played some originals too. A classy group that performs this music expertly. Allen's tone and great melodic improvisation skills meld perfectly.

For fans of jazz orchestras, nothing could be finer than to be in front of the Maria Schneider orchestra, with her talented troupe bringing her lush, romantic, exciting compositions to life. "Last Season" was a fine examples of her first-rate performances that are always great from the first tune to the last. Ingrid Jensen provided a sweet, swirling melodic statement on flugelhorn that floated beautifully over the band as the in intensity, and Steve Wilson, always masterful, negotiated the composition with a piercing soprano sax solo. A great set.

Arturo Sandoval's Latin Jazz Orchestra is always high intensity. "El Sur" and "Rumba Urbana" were among the selection. His tribute to his famous father, "Song for Chico," which featured saxophonist Bobby Porcelli weaving, bobbing and gliding over the exciting, driving propulsion of Latin jazz, got the blood rushing around in one's body. The Jazz Mafia & Brass, Bows & Beats was a 42-member aggregation that added rap influences, Latin tinges and even poetry to the jazz mix. An exciting group. 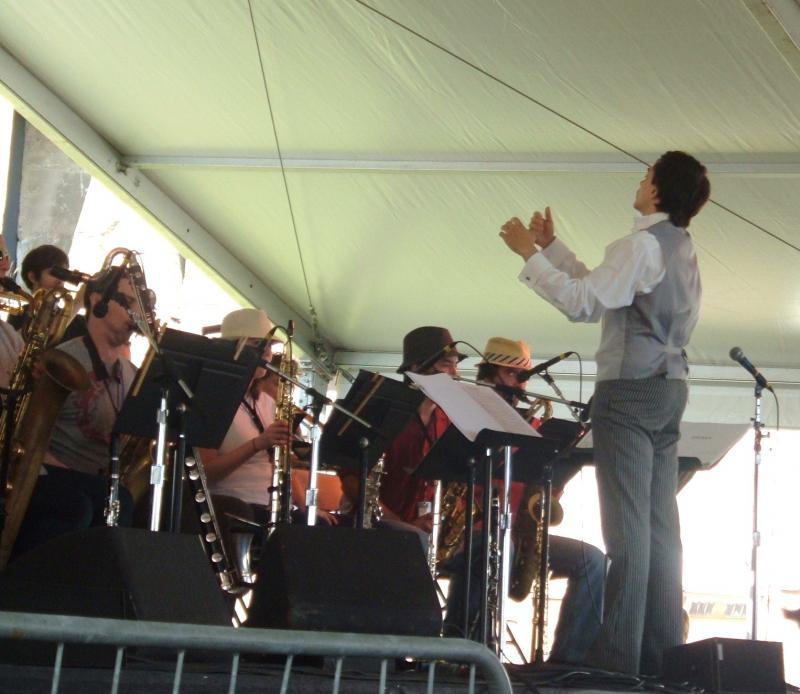 And Darcy James Argue's Secret Society, showed why critics and fans alike are lining up. Like Schneider, Argue's compositional and arranging voice is singular. They are producing superior music with original stamps. The Society jumped right out of the chute with the swinging "Transit" that featured a fiery Ingrid Jensen trumpet solo over the hypnotic rhythm laid down by drummer Jon Wikan. He said "Phobos" was a song that should evoke "fear and destruction." It was an aggressive number than started out with Wikan playing a cajon (a kind of drum box played with the hands) that was electrified, allowing for some spacey effects. The band eerily crept in and then the theme grew in grandeur, with saxophonist Mark Small exploring the theme with a deft, sparkling solo. Enthralling music.

The weekend of 30 bands meant it was impossible to get a great listen to everything. No matter. At each turn the music was engaging and the man behind it all, George Wein, deserve kudos for a great program. 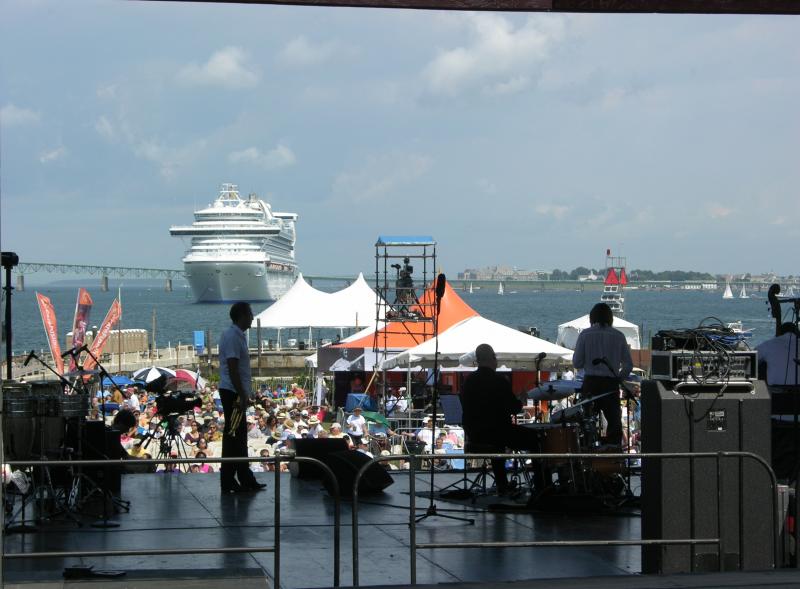 Sunny skies, the ocean air, and sailboats slithering past (even a behemoth cruise ship was anchored nearby) added to the atmosphere—a perfect mix with the fantastic sounds coming from Newport on what had to be its best days.