By STUART BROOMER
June 3, 2008
Sign in to view read count 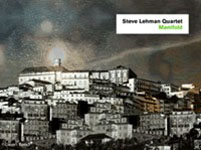 In just a few years, Steve Lehman has established a remarkable track record as a saxophonist, bandleader and composer. This quartet recording is drawn from performances recorded in 2007 in Coimbra, a small city in central Portugal. Contemporaneous with the quintet recording On Meaning (Pi, 2007), Manifold is a slightly looser ensemble, with more emphasis on free interaction than the group textures of the quintet.

It's a consistently brilliant band, from the subtle, offside pointillism of trumpeter Jonathan Finlayson to the springy, resonant fundamentals and almost pianistic upper register of bassist John Hebert. If one musician contributes most to the character of the ensemble play, it's drummer Nasheet Waits; while sometimes sounding like he has extra limbs, it's the spectacular musical intelligence that's most significant. He creates a dense, polyrhythmic backdrop that seems to be simultaneously interactive with every other part of the music. It's particularly evident in the extended performance of Andrew Hill's "Dusk," the late pianist's bittersweet pastoral enriched at every turn by Waits' intense animation. He's particularly adroit at a kind of dynamic suspension that he and Hebert construct behind Lehman, who in turn builds a solo of extraordinary tension with repeated fragments.

While it's convenient to comment on Lehman's background as a student of both Jackie McLean and Anthony Braxton, he's heir to much of the lineage of the free jazz saxophone, seemingly touching on vintage players as dissimilar as Marshall Allen and John Tchicai. Finlayson contributes the only other non-Lehman composition, "Berceuse," an evocative, almost dirge-like theme that seems to touch on some of the characteristic voicings of Booker Little's compositions. The concert ends on an exploratory note, a sopranino saxophone solo exploring circular breathing and multiphonics, aptly entitled "For Evan Parker."