By DAN BILAWSKY
November 20, 2010
Sign in to view read count 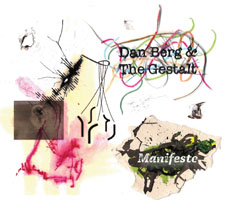 The idea of creation through inclusion seems to be lost on a lot of musicians today. Jazz—like every other area of music—has become highly compartmentalized. A need to place oneself as a direct descendant of a particular artist or style often limits horizon-expanding opportunities and results in stunted creativity. Pianist/composer Dan Berg and his band, The Gestalt, seems to see things differently, with open arms and an open mind. Berg's debut album, or Manifesto, if you will, is a bold statement about how disparate ideals can work together if the puzzle pieces are put together correctly. While old-school swing—or swing of any kind—and bop are nowhere to be found here, everything else seems to work its way into Berg's bag.

As the leader/creator, Berg is at the center of all of the fun, but each musician is responsible for bringing something different into the mix. The rhythm duo of bassist Matt Wigton and drummer Pat Agresta make the tag team that provides a twenty-first century rhythmic thrust. They can get down in the rock-meets-drum-n-bass trenches ("Waiting For A Hit"), provide odd-metered grooves that morph into disco/go-go beats ("Why Is A Crooked Letter"), and provide soulful funk ("Conexions") with equal aplomb. Vocalist Kristin Young provides some stratospheric soprano singing that first appears like a sample on a Portishead song, but later takes shape on two pieces that blend art song with more modern influences. Clarinetist Adrian Mira and alto saxophonist Jessica Lurie, carry the most improvisational clout, along with the leader, but never stray too far from the course that Berg sets for them.

Berg uses his array of instruments to bring different ideas into different pieces. His melodica work on "Waiting For A Hit," incorporating faux-Andalusian allusions, is a departure from the amped-up atmosphere of the set. His Fender Rhodes at the start of "Relish Your Fears" is a stylistic throwback, but his soloing later in the song has a paranoid purity that's endemic to Radiohead's best work. Agresta also contributes some inspired, aggressive soloing to this enthralling journey. While Berg is open to influences from near and far, his decision to close the album with a solo piano piece ("Magnetisma")—a seemingly naked statement compared to the layered work of the previous performances—is one of his best. He sprinkles some delightful Cuban-inspired runs into this performance and delivers a hopeful piano proclamation that ends his Manifesto with a positive message.

Waiting for a Hit; Why is a Crooked Letter; Relish Your Fears; Timshel (Thou Mayest); Conexions; Hook it Up; Vibrant Phases; Magnetisma.