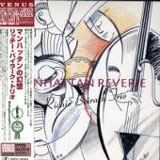 It was all in the eyes. They say peek into someone's eyes if you really want to see what they're about and how they're feeling. From the looks of things at a performance to celebrate his sixtieth birthday at Birdland at the end of August 2007, it seemed that Richie Beirach was feeling good. Sounded tops, too.

This classically-trained veteran pianist was marking his sixth decade on earth with a little help from his friends—trio band mates, bassist George Mraz and drummer Billy Hart, expert rhythm makers also featured on this highly effective 2007 Japanese import from Venus Records, Manhattan Reverie. They all appeared to have a certain twinkle in their eyes, suggesting that they are very comfortable playing with each other, wise to each other's ways and that they were having a good time. It was kind of a nice message: Age has nothing to do with vitality or musical ability, except maybe, in this case, it adds to both of those things.

Two terrific guests shared in the belated (his birthday was in May) festivities at Birdland —trumpeter Randy Brecker and the violinist Gregor Huebner. Whether live or on recording, Hart and Mraz supplied excellent support to Beirach's intricate, introspective and lively playing.

Surprises of the show included explorations of Bartók and Bach, each offering gorgeously rendered improvisations. A tribute to the late Michael Brecker, in the form of a rearranged "old Russian folk song as Beirach described it, was moving and beautiful, if at moments almost painful to witness, a feeling heightened by the intensity of brother Randy's participation. These stunning, seemingly effortless endeavors were punctuated by exquisite soloing by Huebner.

The live event had been touted in some circles as an occasion also to mark the release of Manhattan Reverie so the repertoire sampled on the Friday before Labor Day was somewhat unexpected, as no pieces from the album were played in that particular set. But the recording merits repeated listening. It features several standards, including "You Don't Know What Love Is, "On Green Dolphin Street and "If I Were a Bell, all performed at breakneck pace. Somehow that works. In fact, for those of us out here who are a little love-weary (or even love-leery?) it was a welcome change of pace to hear a heart-crushing tune like "You Don't Know What Love Is zip by at such a clip. Would that the pain of lost love could breeze by like that. The Germany-based pianist's own title track is delicious and more gently realized, though a pretty violin accompaniment goes by uncredited.