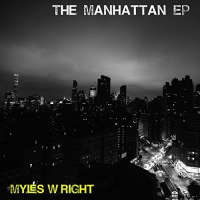 For evidence that the big-band tradition is alive and well, look no further than this release from composer and arranger Myles Wright. His second self-produced recording after 2015's LA EP, he's shifted his focus to the other coast this time, and with a top-flight crew of New York musicians to perform four ambitious, infectious charts, it's an enjoyable and promising outing.

One noticeable change from Wright's earlier record is that the pieces here are a bit shorter, resulting in more compact statements of melody and theme. This is all to the good, as Wright's got a strong compositional voice when it's not getting lost in the complexity and busyness of some of his arranging. This tendency only really emerges on this record with the opener, "The Run," however. While energetic and feisty, with some catchy percussion and a dynamic trumpet solo from Alex Norris, the chart as a whole simply contains too many disparate ideas for it to fully grab the listener.

The remaining cuts are more successful overall, particularly in finding a balance between the sophistication of Wright's arranging and the emotional center of each piece. The second track, "Check In," is built around a swinging groove that allows ample space for soloists and ensemble alike to develop the melodic and rhythmic foundation of the song. Even better are the more contemplative tracks: the melancholy, perfectly-titled "Rain at Night," with especially evocative solos from alto saxophonist Mark Gross, trumpeter Tatum Greenblatt and pianist Luke Carlos O'Reilly, and the dark-hued "Sketchbook," with a poignant melody introduced by Saul Rubin on guitar and featuring a bluesy, rich tenor solo from Troy Roberts. The brass voicings on these tracks are exceptional in enhancing the sonority and lyrical depth of the music.

Like Wright's first release, this one also includes a Blu-Ray disc with black-and-white videos of studio performances of each of the pieces. It's well-filmed and instructive, especially in identifying the soloists, and it's a terrific companion to the music, as it's a lot of fun to see the musicians enjoying themselves during these recordings—as indeed they should, as there's a good deal of fine music here in a mere 22 minutes or so. Let's hope that Wright can release a longer album in the future, as he's definitely got the ability and ambition needed to make an even more substantial contribution down the road.

The Run; Check In; Rain at Night; Sketchbook.