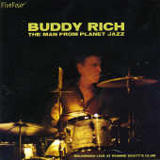 Nobody's really clamoring for big band recordings from 1980 these days, and it's probably the case that no one was back then, either. But it's also true that drummer Buddy Rich never really gave a damn what anybody thought about what he did, which is what makes this live set from Ronnie Scott's worth a listen.

Many big bands went astray by incorporating modern sounds into their arsenal out of economic necessity. Rich is no different; here he brings the funk with fast paced soul rhythms, popping electric bass, and judicious use of the wah-wah pedal on the horn solos. We're far away from Tommy Dorsey and "Opus One and purists will no doubt find little to admire here. But somehow Rich makes it work.

The bandstand has the chops to pull off the music without making it sound like watered down Earth, Wind & Fire and with rhythm being the key ingredient in this type of exercise, Rich and bassist Wayne Pedziwatr pack a wallop. Long out of print, The Man From Planet Jazz accomplishes the almost unthinkable: a fiery, funky record from one the masters of big band recordings.